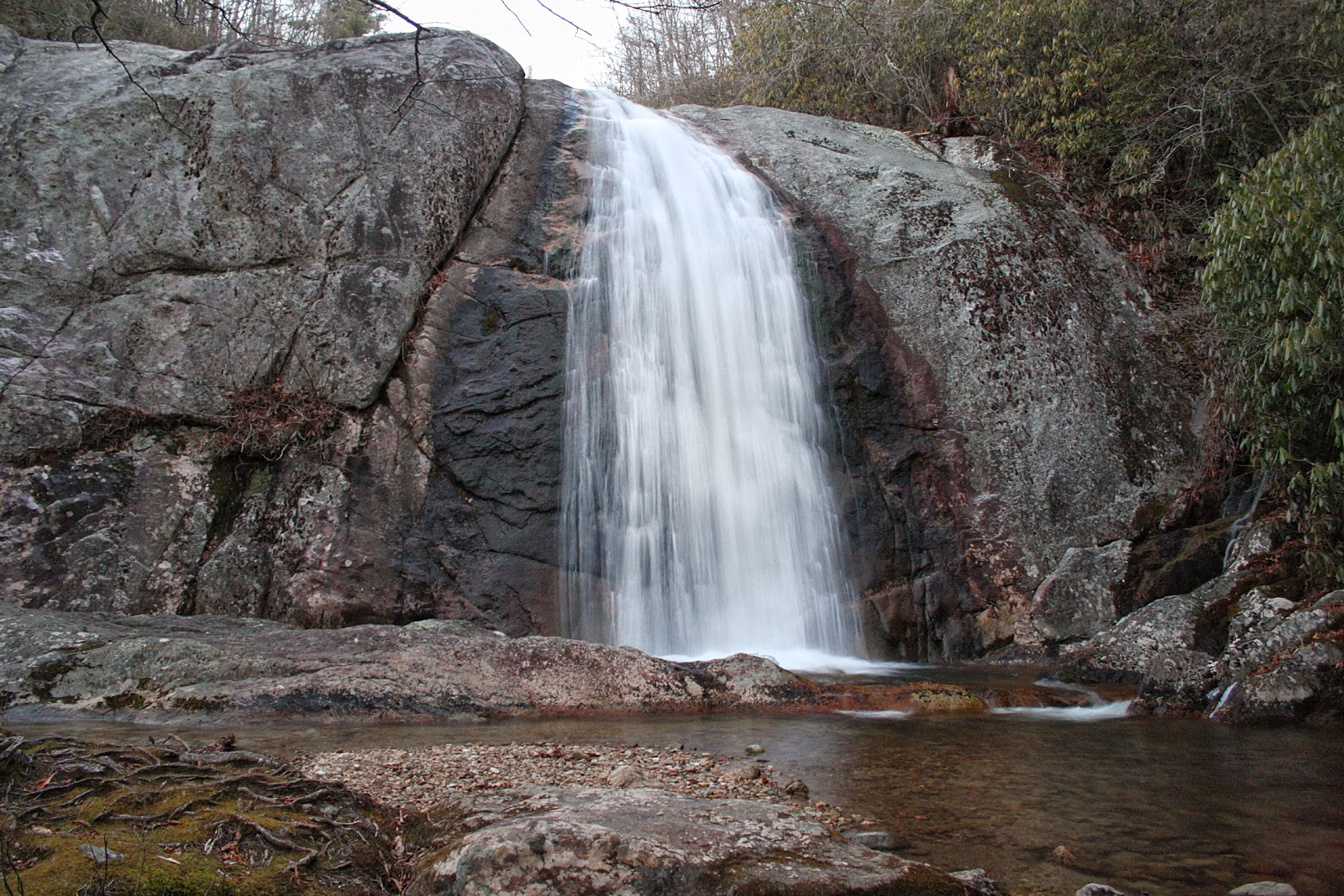 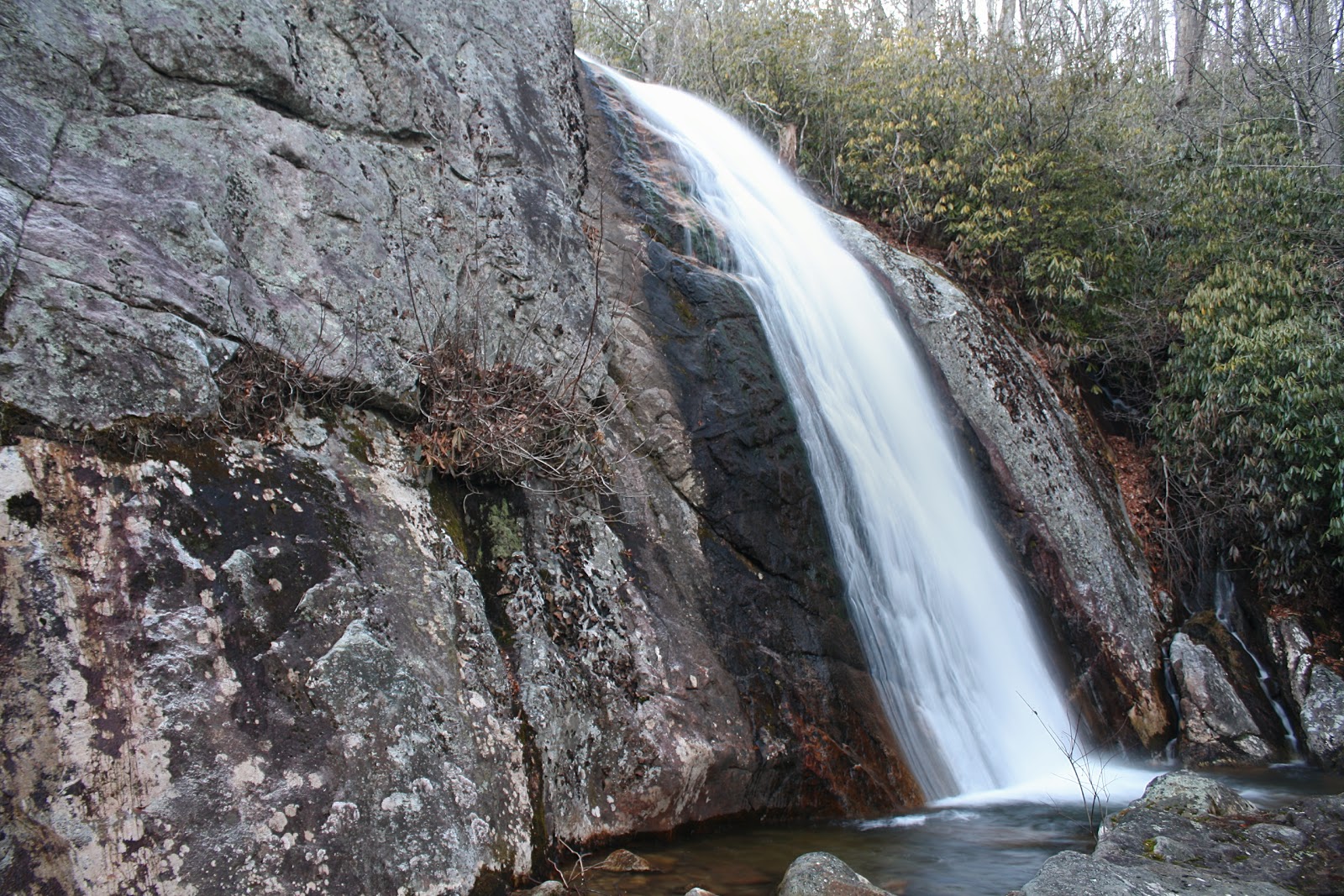 There seems to be quite a few routes to the falls but coming from Boone head south past Linville on US 221 and NC 181.  Then turn left onto Old Jonas Ridge Rd. (SR 1518)  just before 221 and 181 split. Continue on, passing the Blue Ridge Parkway, for about 2 miles to a fork with a church on the left.  Go left at the fork onto Mortimer Rd and follow it for 2.5 miles, then taking a right on FR 58.  You will cross a small bridge over North Harper Creek and in about 0.2 park at the small pullout on the left. There will be a sign for North Harper Creek Trail.  The hike to the falls is about a mile.

We pulled off the road, parked, and read the North Harper Creek Trail sign next to the trail head.  The blue blazed trail climbed down the mountain to the creek and seemed simple enough.  I hadn't really bothered to look up any of the details so I just figured follow the trail running beside the creek and it will have to come to North Harper Creek Falls at some point.

So we hiked on and on and then on some more.  About 3 miles in I was pretty sure we had missed the falls somehow.  New plan; just keep hiking until we eventually hit South Harper Creek Falls and then find North Harper Creek Falls on the way back. It sounded good until each of the many creek crossing got bigger and bigger.  The first couple of creek crossing were no problem as we rocked hopped across.  The next three or so luckily had logs to walk across.  Then the crossing got wider and deeper with no choice but wading.

Normally wading the creek is not a problem but it was January with many visible icicles hanging from the rocks in the creek and lots of snow still on the ground.  Reluctantly, I took of my shoes and stepped into the freezing creek. Before I could even dry off and put my shoes back on it was time to wade again.  So at this point each creek crossing started with a long debate of turn back or press on.  Finally, with my feet frozen we came to another crossing and couldn't decide what to do.

Our solution was flip a coin, heads cross the creek and keep hiking even though we weren't exactly sure where it was taking us or tails turn around.  Probably not the best decision making tool but tails it was.  So we turned around and wading back across the many creeks we had just crossed.

Hiking out we ran into Chestnut Cove Branch Falls which I recognized and knew it was just down stream from North Harper Creek Falls.  Chestnut Cove Falls is a very narrow and long cascading waterfall that flows down a large sloping rock.  To me it is pretty unimpressive except for the fact that you can walk up, down, and all around it.  I actually thought the best part was the many potholes visible in the rock beside the falls.  So after snapping a few pics of both we headed back through the trees and continued hiking up the trail. 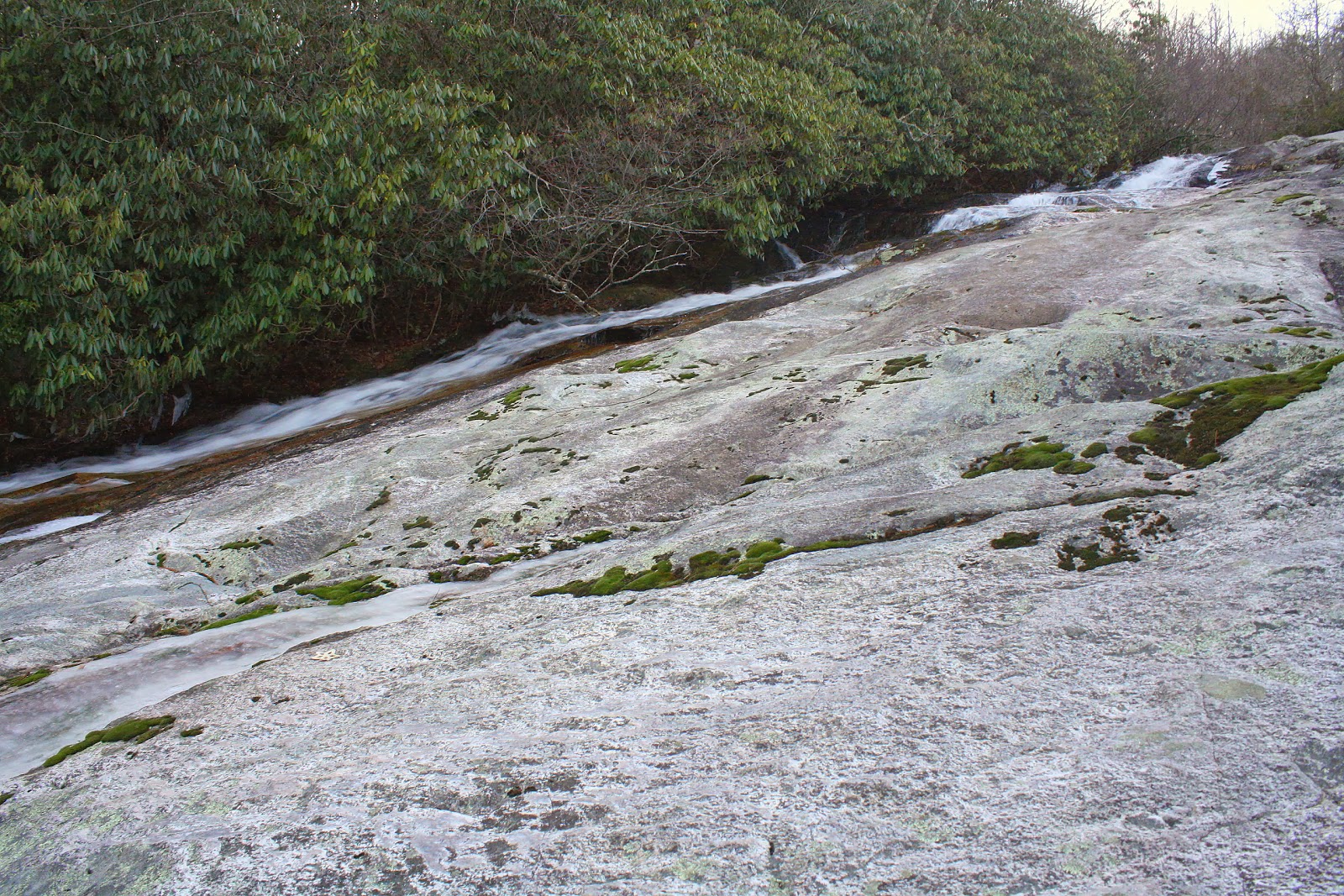 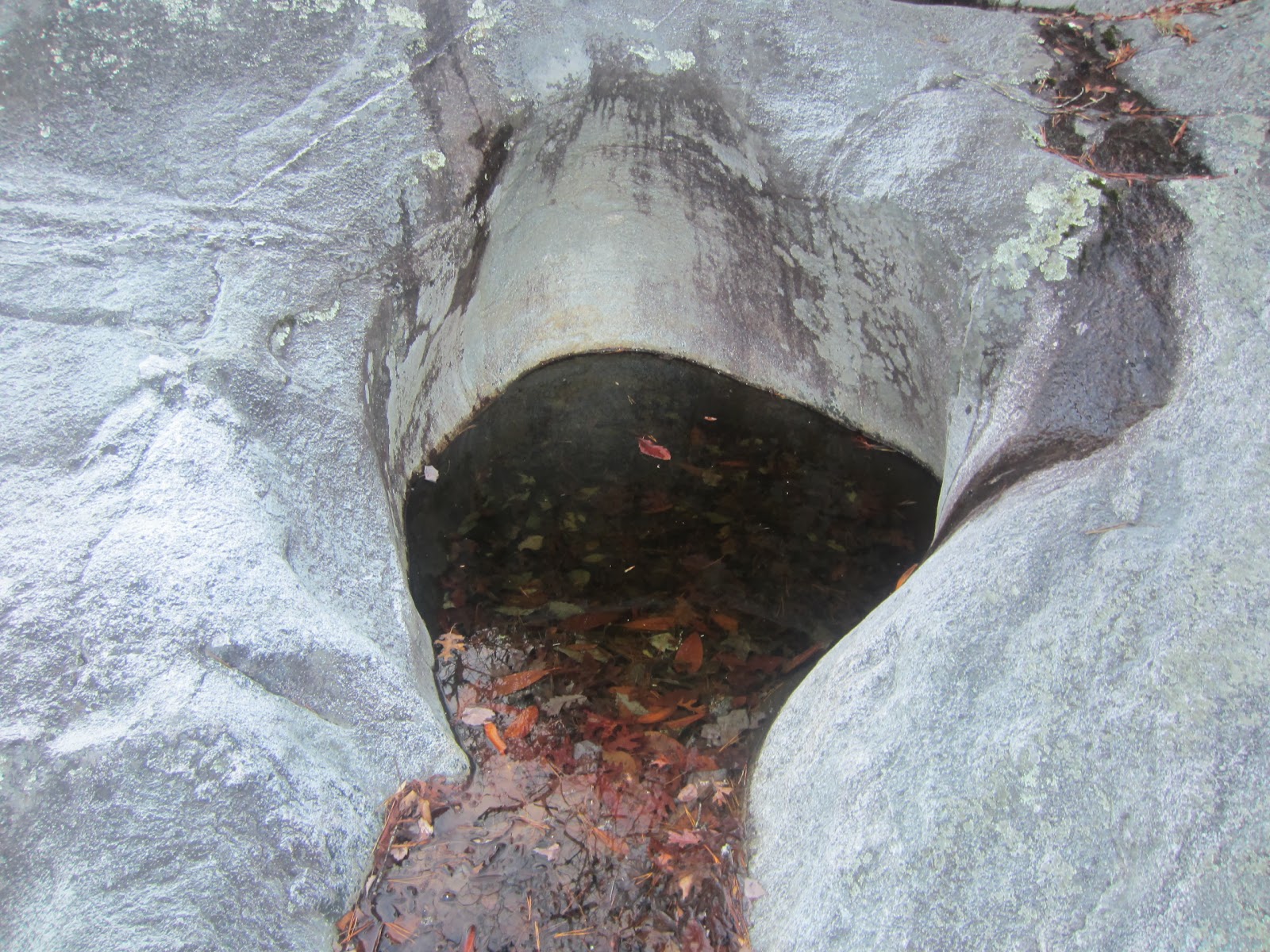 We crossed the creek again and headed up towards a campsite I had caught a glimpse of.  Finally, just in the distance through the trees I could make out a waterfall.  We hiked through the trees and the area opened up and there was North Harper Creek Falls.  It is still crazy we missed it on the hike in. The only thing that makes sense is when originally heading down the creek I just never turned around to notice it.  But atlas we had found it and the day was right again. 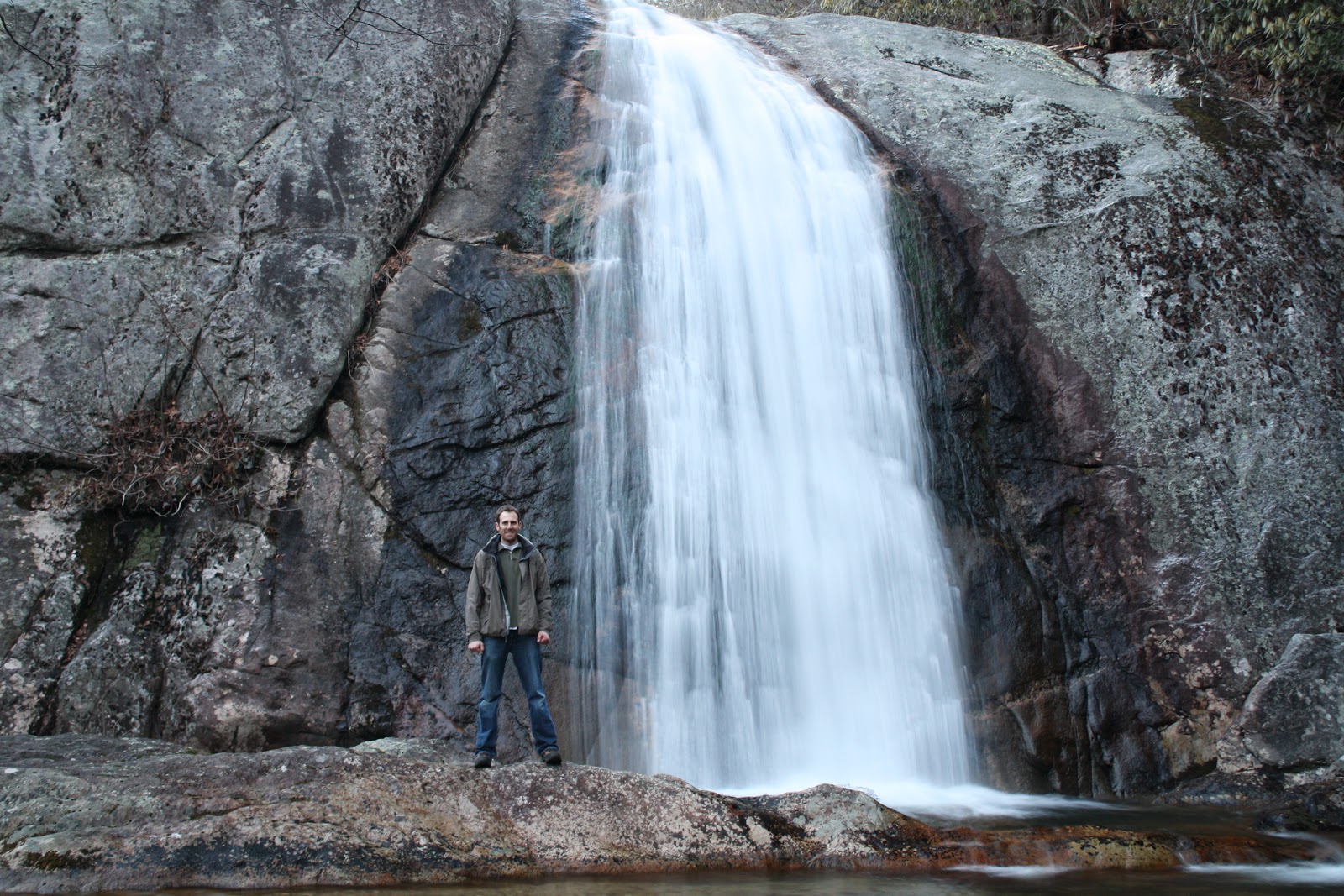 I immediately broke out my camera and started setting up as the sun was going down.  All day I had complained about the bright sun and no clouds, as I just knew it would ruin my pictures. Now as I quickly snapped pictures, I worried about the disappearing light.  After hurrying through, I packed up and we headed out. I tried not to take too long as I knew nightfall was coming, but it came and it seemed to come instantly.

Before we knew it we were walking and searching for the trail in the pitch black woods.  At this point it was harder and harder to make out the trail and we were not sure which way to go.  I knew we would eventually get out but I started to worry about what are wives were thinking.  We had planned to be back around 3, but it was after 7 and we had no cell phone service.  So we hiked on through the woods with our cell phone flashlights in hand.

Since most of the trail hugged the creek we decided our best bet would be to hike alongside and try to pick up the trail again at some point.  So we started bushwhacking, ducking and moving through the trees as we grabbed onto anything we could to help pull ourselves up the mountain.  After we got a ways up we swung back towards the creek and crossed above the falls.

We still saw no trail but happened to notice a clearing just up the mountain.  We climbed up and there stood an abandoned house and of course a no trespassing sign just beside it.  I'm always weary about walking through someone else's property especially at night in the woods.  Maybe because you always hear those stories about the crazy owner in the middle of nowhere waving a shotgun at anyone who dares to trek through their property.  But the house was definitely empty and it was either head on or return to being lost in the woods.

At the beginning of the hike we had seen many no trespassing signs on the opposite side of the creek so it was apparent we were now on that side with the trail being on the other.  Hiking down the dirt driveway we decided to head down a path on the left, go back to the creek, cross, and pick up the trail.  This seemed like a good idea especially since we would get off this person's land.  We headed back into the trees, passed an old abandon building, searched and searched but couldn't find the creek.  At this point we were tired of being lost in the dark woods so we decided our best bet was to go back to the driveway and follow it to the road. After a long walk down what seemed like an endless dirt road we finally hit the forest service road. We took a left and headed up the road and just around 9:00 pm we caught our first glimpse of the van parked by the trail head. It was a glorious sight.  Cold, tired, and now relieved, we climbed into the van and headed home.

Initially we apparently missed the path that turns off of North Harper Creek Trail and leads to North Harper Creek Falls. Hitting the falls on the way back was more luck than actually knowing where it was.  Even after visiting it I'm still not straight on the directions; as part of our hike was in the dark and through private property.  If you are reading this and planning a visit I would suggest getting detailed directions.  Although knowing myself it was probably a pretty easy hike that I just totally screwed up.  I am very thankful for the technology of cell phone flashlights.  Without it, I would have been spending that night in the cold woods.

Minus the getting lost at night part, the hike is pretty enjoyable with lots of cascades and scenic views of the creek. The waterfall is a nice 40 ft. drop over a long rock wall.  The water at the base is very shallow as you can walk up and touch the falls. If I get a chance to do it again it wont be during winter though.  I would like to start earlier too, hiking further downstream to hit Harper Creek and find South Harper Creek Falls.

Pics from the hike: 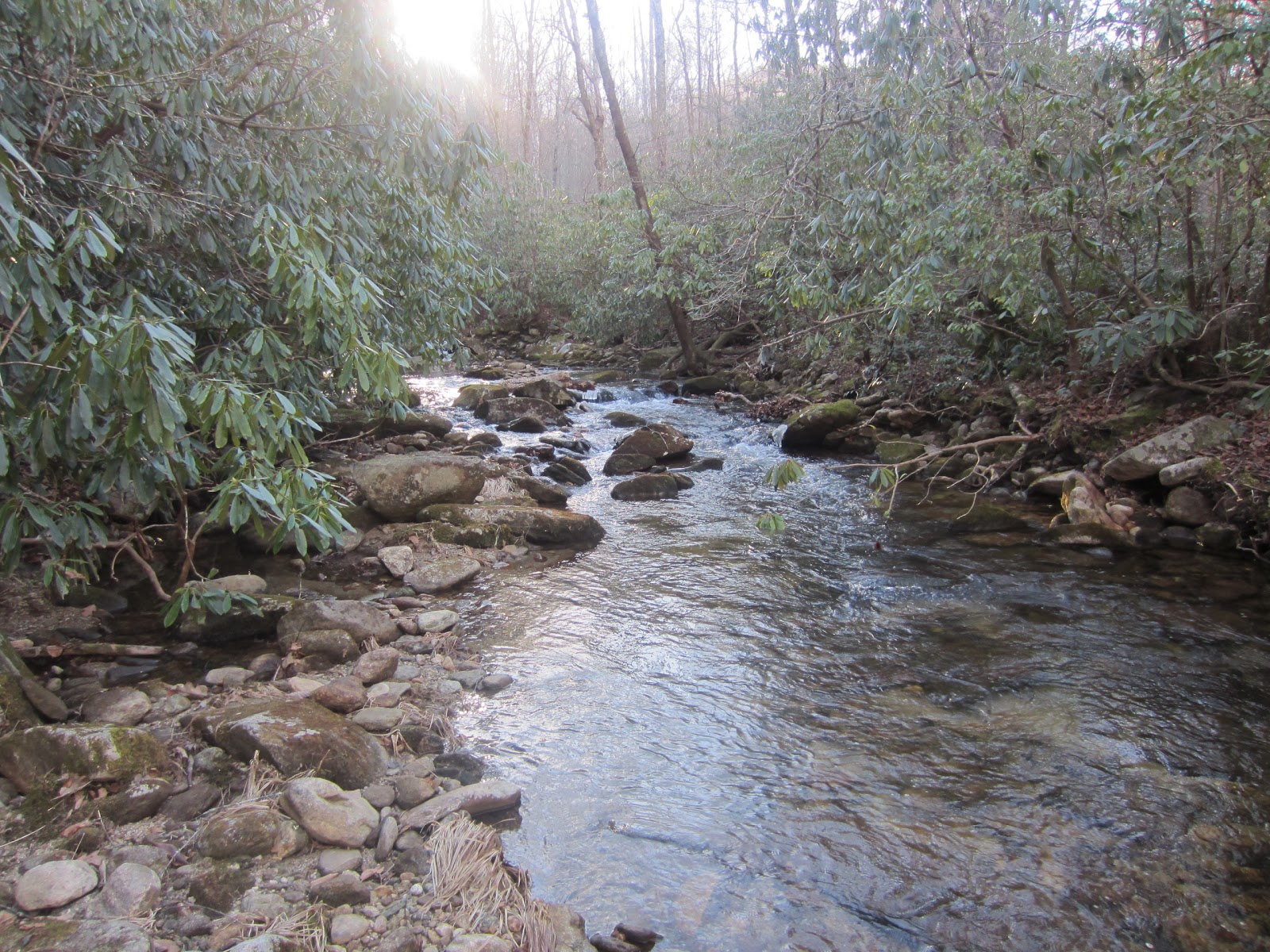 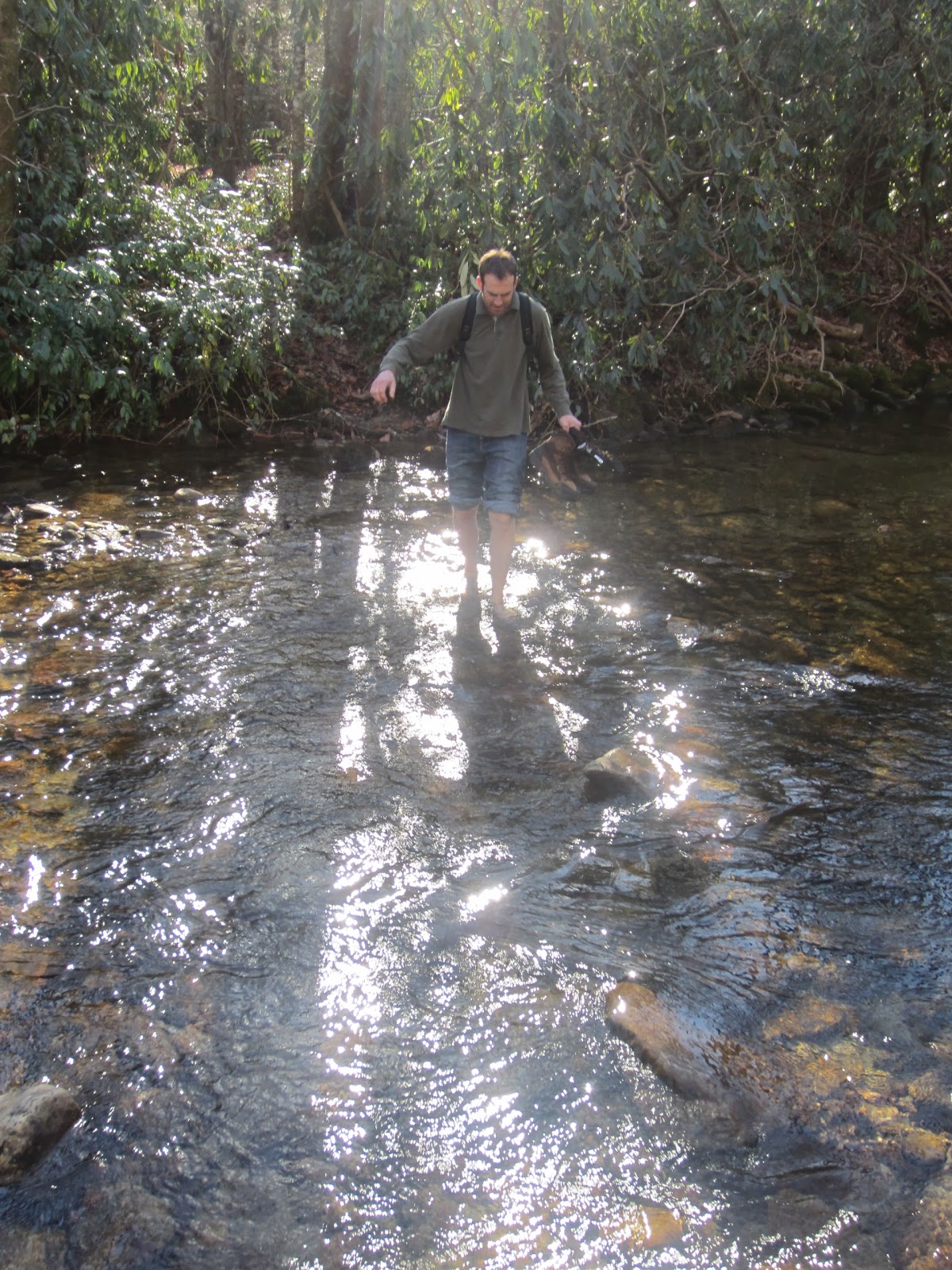 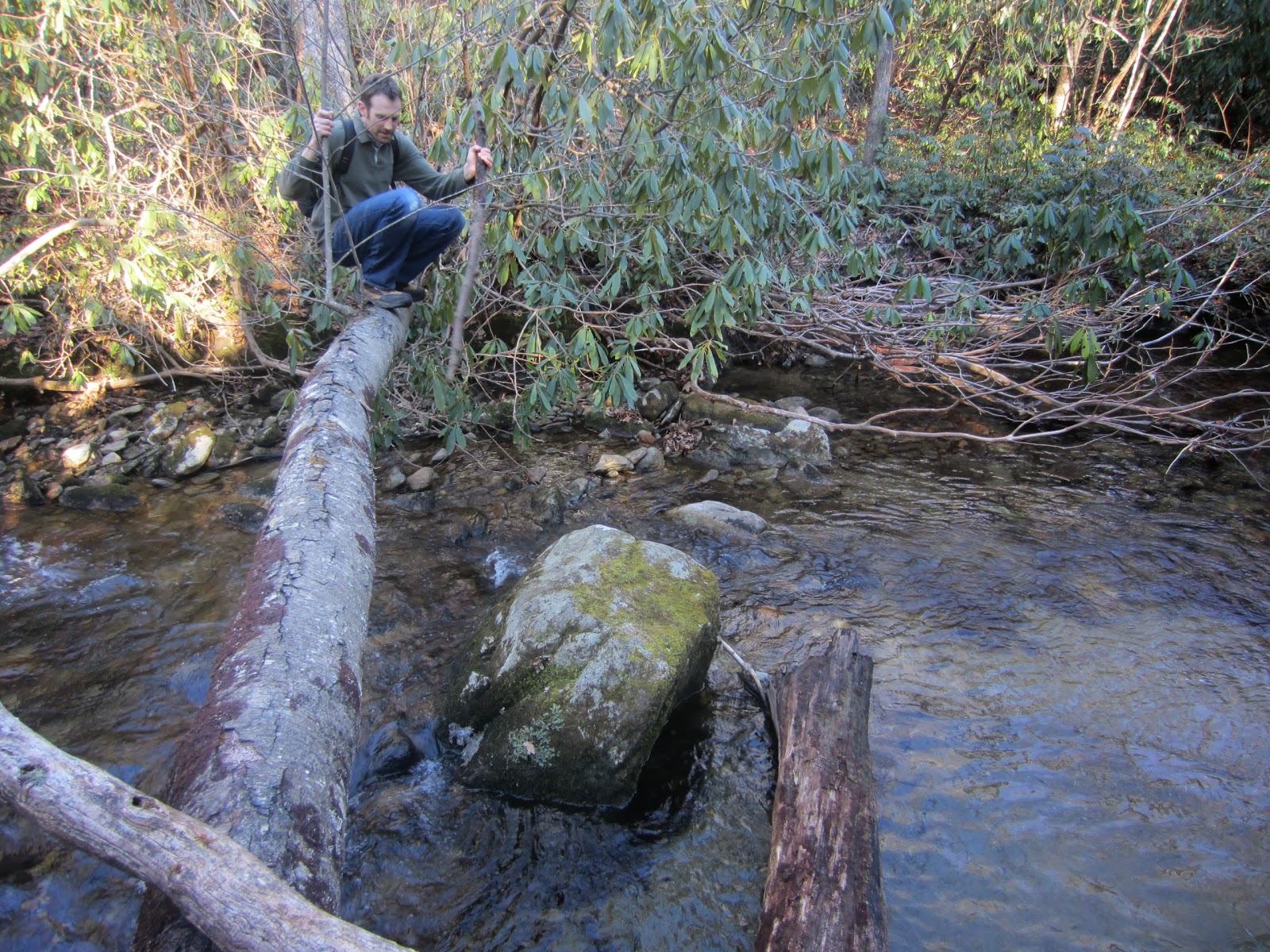 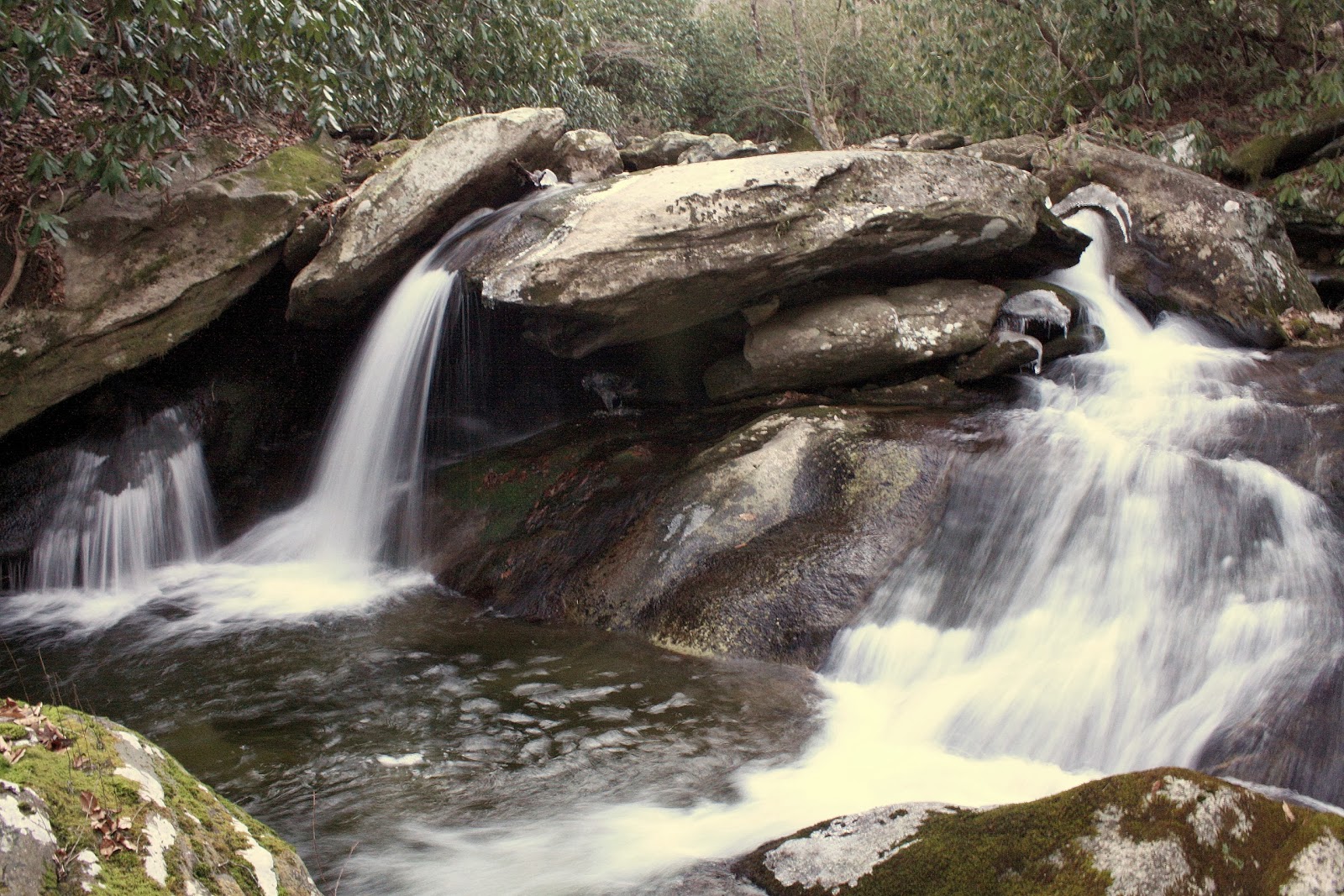 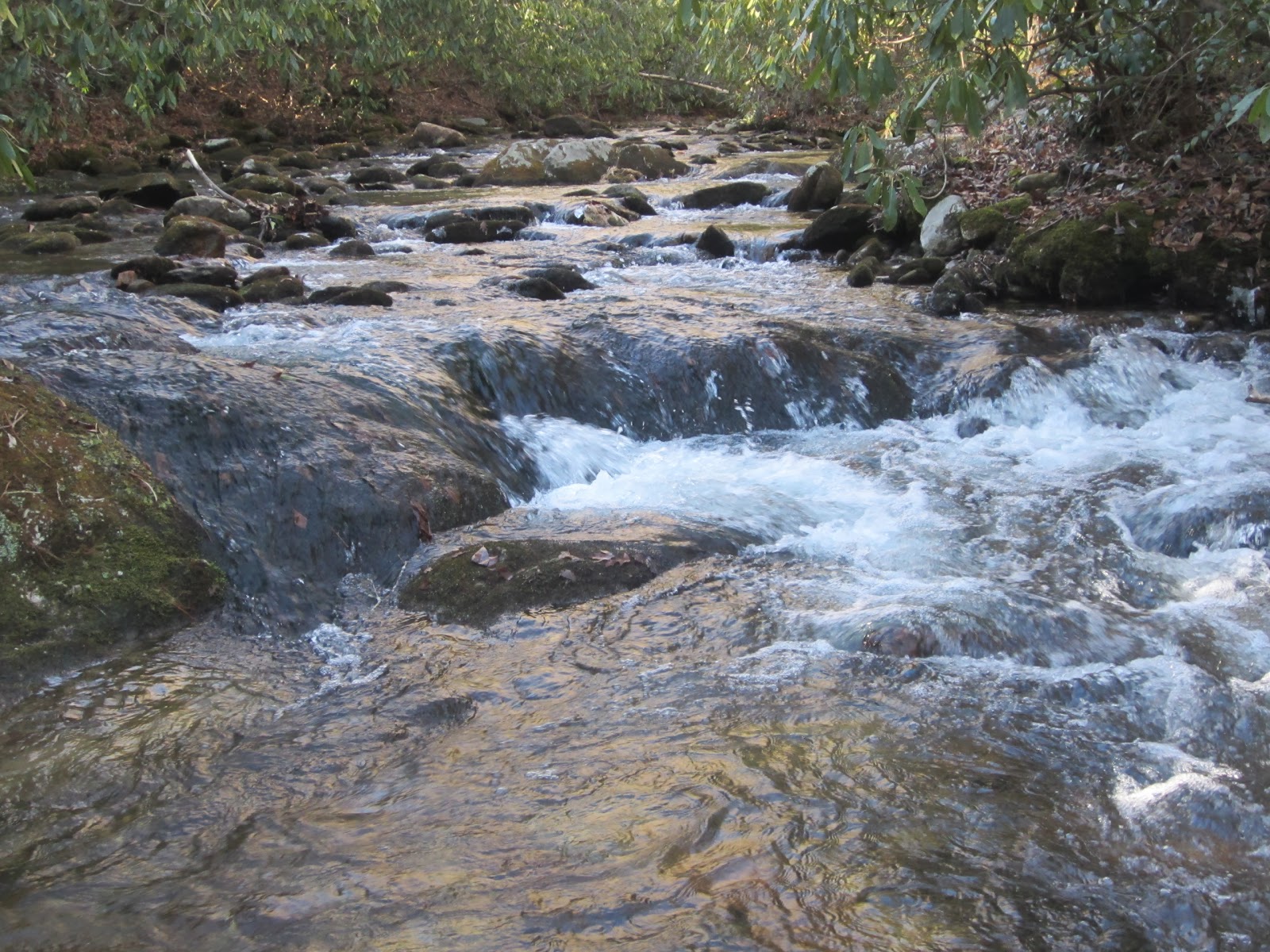 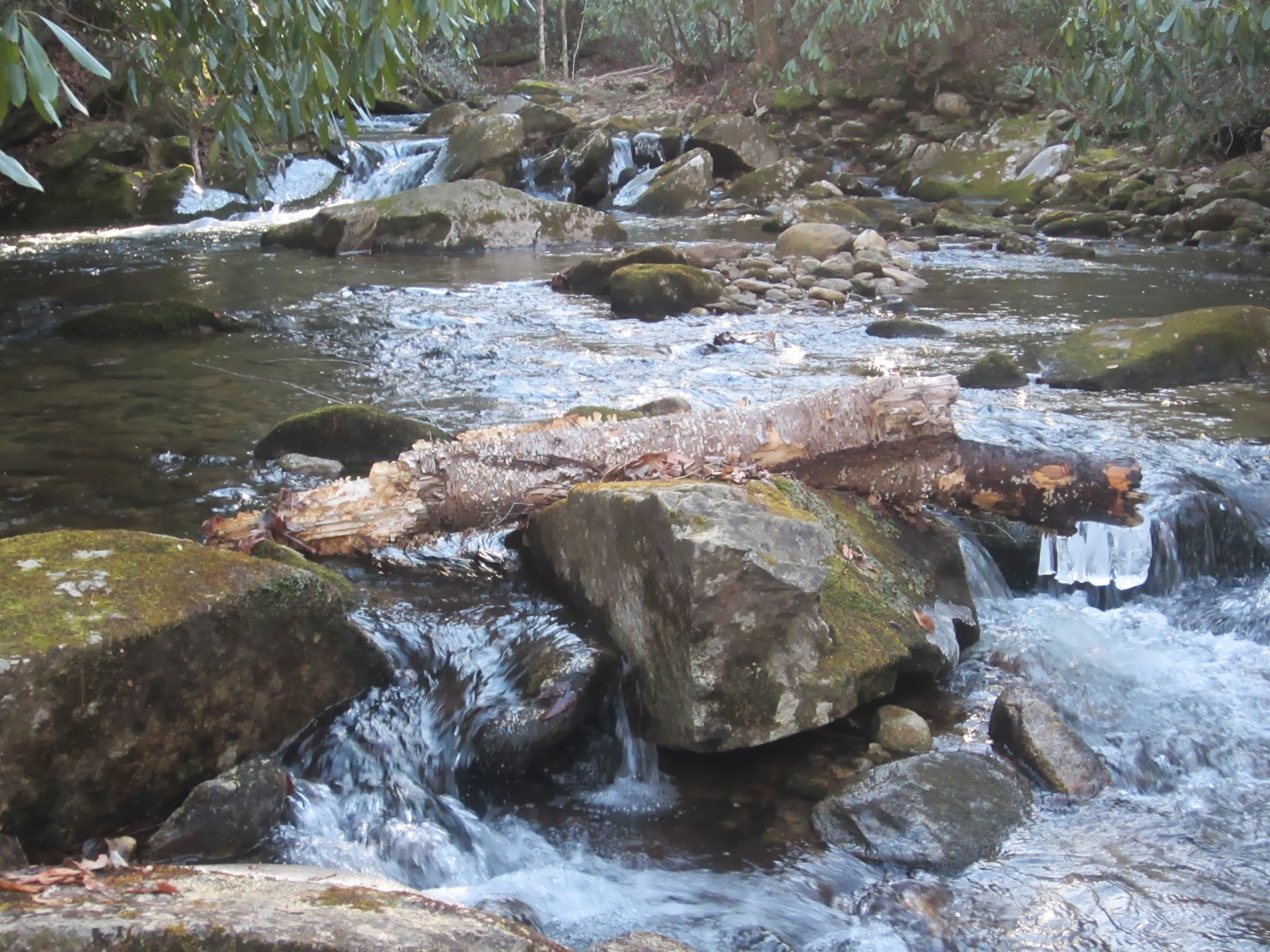 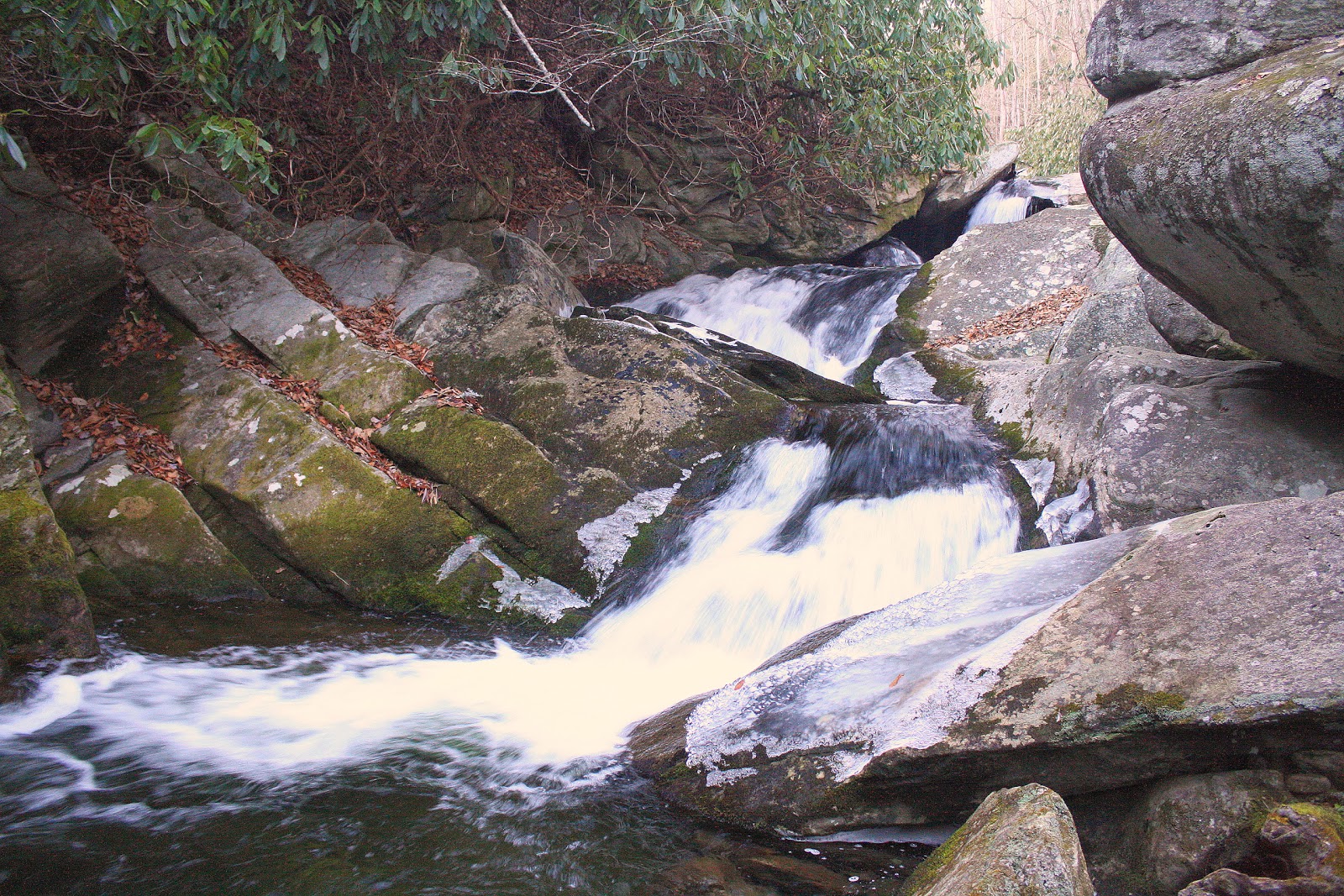 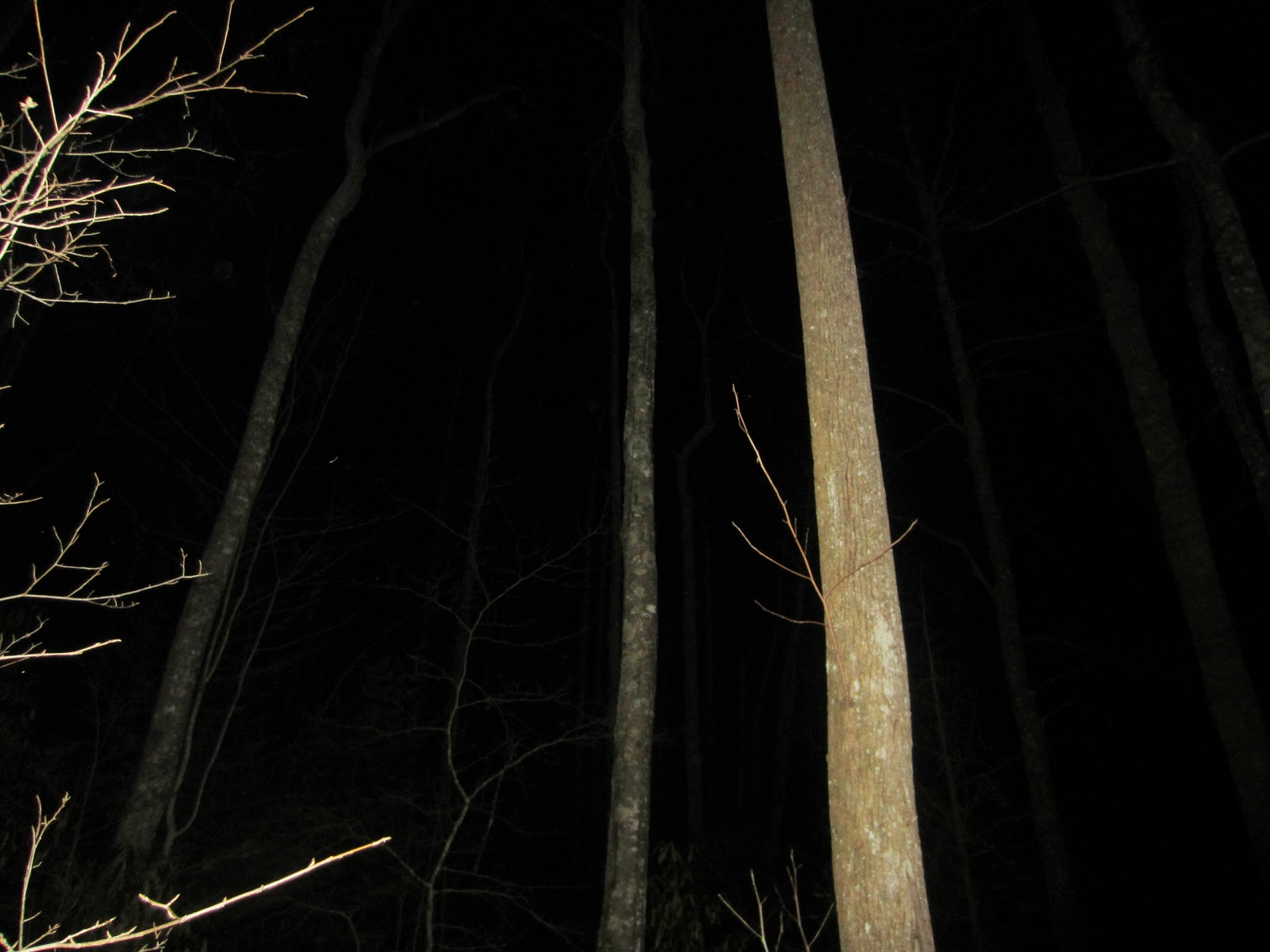 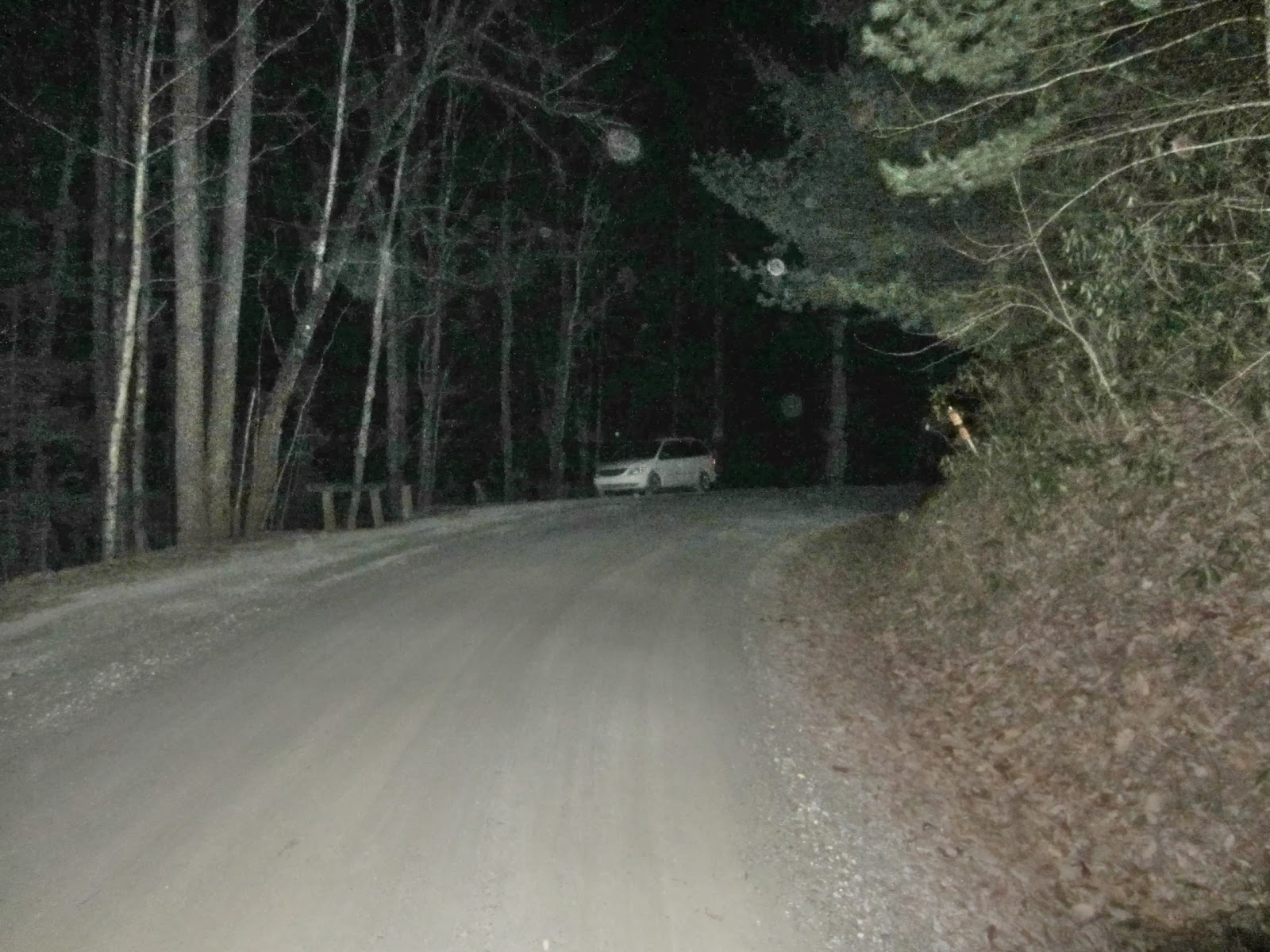