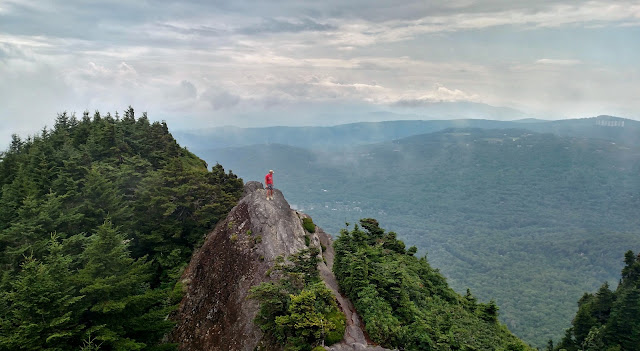 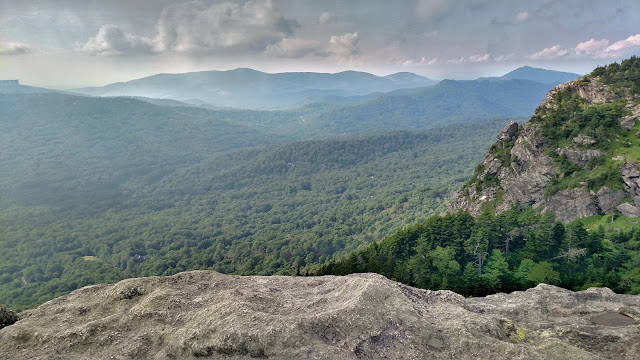 The week was quickly rolling by and we were yet to complete our traditional brothers only hike.  This was were my brothers and I would go hiking all day and the wives watch all the children.  Which, if you ask me, is a great tradition.  But I had been so busy forcing the children to tirelessly hike nonstop each and every day that it was already Thursday. And now we only had one full day left.  So by default, Friday became our kid-less hike day and all the children rejoiced.

We had decided to do the Grandfather Mountain Trail.  The trail is full of ladders and cables as you trek up and over exposed cliffs and large rock outcroppings. The entire trail is basically on top of a mountain as you carefully climb the many peaks while doing your best not to fall to your death.  And believe me there are more than numerous places on the hike you do not want to slip.  But though it may sound scary and the pictures online may have frightened me significantly, actually doing it wasn't that bad.  It is actually really cool and lots of fun.

However, one thing that was not cool at all is the Profile Trail.  I really hate the Profile Trail and my knees despise it.  The day had already begun on a bad note as the sun was nowhere to be seen in the completely cloud covered sky.  Then making things worse I had to hike the Profile Trail.  While it originally began as a nice stroll down to the scenic river things quickly changed.  The trail immediately cuts away from the beautiful stream and begins its hellish 3 mile nonstop climb.  Up and up it goes as it endlessly climbs.  And the worse it yet to come.  That last 0.3 miles, just after you pass Shanty Spring, completely kicked my butt.  The trail seriously went straight up.  My legs hurt now just thinking about it and I will just add that I did my fair share of resting during this endeavor.  But the sad part was, after packing on so much holiday weight, I had made a concerted effort to get back into shape much earlier this time.  I started in January so by July I felt great and looked pretty good.  I was confident and ready for a summer of hiking.  But I quickly realized I was not at all ready for this hike.

Here is what it looked like along with me falling so far behind: 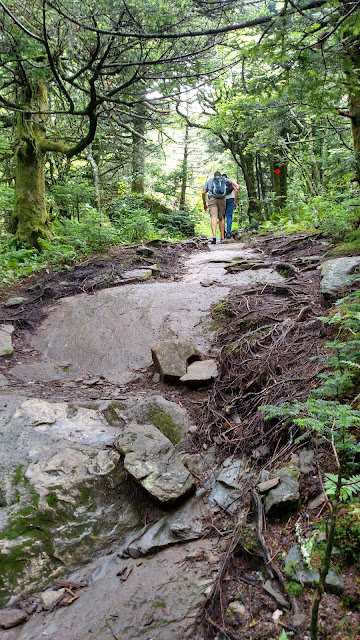 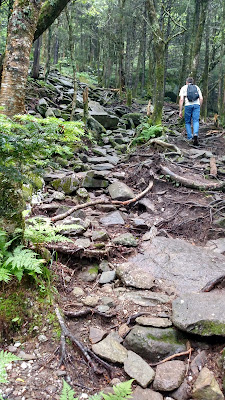 Then as I couldn't possibly go any longer I caught a glimpse of that beautiful sign that read "Grandfather Mountain Trail" up at the intersection ahead.  To the left would take you a short distance to see Calloway Peak.  To the right is Attic Window Peak, MacRae Peak, and the swinging bridge parking lot where the hike ends.  Now I really wanted to see the view from Calloway Peak but that wasn't happening. I mentioned earlier it was a very cloudy day, well on top of that now it was a extremely foggy day too.  It just happened that a swirling thick fog was totally engulfing the mountain.  And while it was pretty cool and mysterious to hike through the fog, the views were non-existent.  So we went ahead and made our way towards Attic Window Peak while hoping the fog would eventually clear.

Once on the Grandfather Mountain Trail things got much easier.  Though minus the one wrong step and you fall to your death part.  But stamina wise, I felt rejuvenated as the elevation change was now very minimal.  Plus it was much more enjoyable climbing up, down, over and through the rocks.  Most of the hike now is on open rock with spectacular views in every direction.  Well the views I could see when the floating fog had a break or gap.  It was a really neat experience and very enjoyable.  Below are some pics showing the hike and a few of those spectacular views in those rare moments I could actually see something.

Hiking along past Attic Window, which was completely engulfed in fog, next up came MacRae Peak.  And as we got closer the ladders and cables became more abundant.  This was definitely my favorite part and so much fun.  Climbing down and through huge and steep rocks all the while reassuring yourself you wouldn't fall.  It was a little scary in places but a great feeling looking back on it now. Here's a few shots of the adventure from the trail: 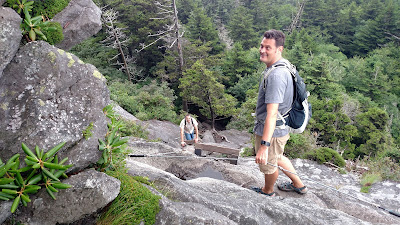 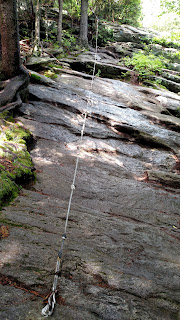 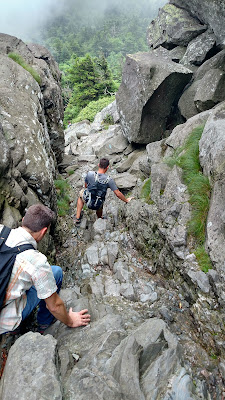 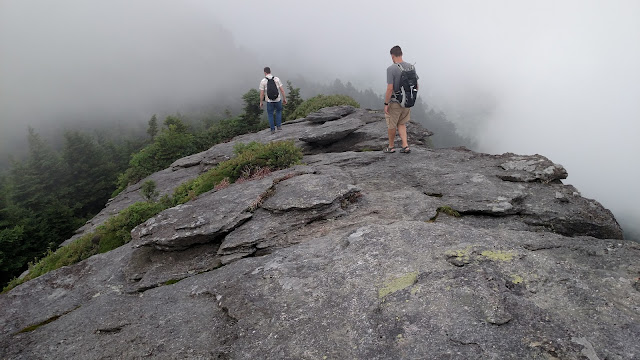 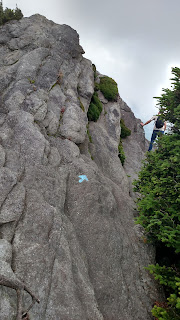 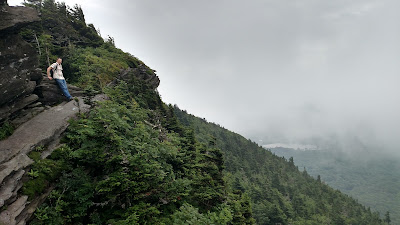 After MacRae Peak it's not much further until you reach the parking lot and swinging bridge.  This is the stretch when you start to see the swarms of people.  People that parked at the bridge and ventured onto the trail.  The many people with no idea where they were going, clothes you wouldn't hike in, no water, and always with a questions of what is up ahead.  So we kept trekking on all the while explaining the trail to almost everyone we passed.  Eventually reaching the parking lot, I felt very relieved.  I was beat and my knees were now killing me. Just up ahead was a gift shop and a restroom.  I couldn't have been happier.  And for some reason I saw that store and I was craving an ice cold Coke.  I hardly ever drink any soda so this was going to be a treat.  And I was legitimately very excited about it.  Entering the store I headed for the bathroom and next for the drink cooler.  5 bucks.  5 freaking bucks they wanted for a Coke.  Sadly I declined and headed up to check out the swinging bridge.

Standing in front of the impressive Grandfather Mountain Mile High Swinging Bridge was like stepping back into a childhood memory.  I had been here once before and I could vaguely remember it was a frightening ordeal.  It was hard to remember all the details but I knew the bridge moved and the bridge was scary.  Now, many and I mean many years later, it was just a neat looking bridge.  A neat bridge that took you to some nice views of the mountains.  Some very great views that while beautiful would not be worth the price of admission as there are so many places around here that you can see these gorgeous views for free. But if you were planning on seeing the swinging bridge while also hiking the Grandfather Mountain trail, then yeah it's probably worth the price.  Just standing on top of the peaks, soaking in the views while not having to hike the Profile Trail; yeah that's definitely worth it.

Anyways if you are looking to hike the Grandfather Mountain Trail, also known as the ladders and cable trail, you have three choices.  Hike the Profile Trail to Grandfather Mountain Trail, hike the Daniel Boone Scout Trail ,which goes through Calloway Peak, before connecting to the Grandfather Mountain Trail, or pay 20 bucks and drive right up to the trailhead along with the swinging bridge.  We obviously, from reading above, hiked up from the Profile Trail.  This made the most sense for us as my brother's wife paid the admission fee, picked us up at the swinging bridge, and drove us back to my car parked at the Profile Trail.  This was awesome since we didn't have to hike back and worked out because my car was right on the way back to the mountain house.

So if I were going to do it again I probably just pay the money and park at the trail, avoiding that Profile Trail which I loathe.  Though whatever you choose will be lots of fun and very memorable.  Grandfather Mountain Trail is a challenging and great adventure full of spectacular views. But, the best part is I get to tell you twenty dollar paying suckers that I walked the Mile High Swinging Bridge for free.  Though the opportunity has not come up in my everyday conversations, yet. 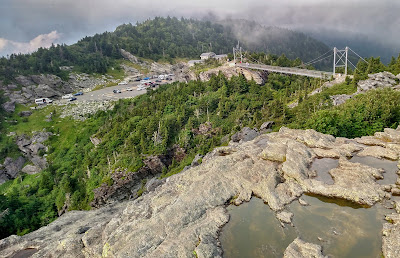 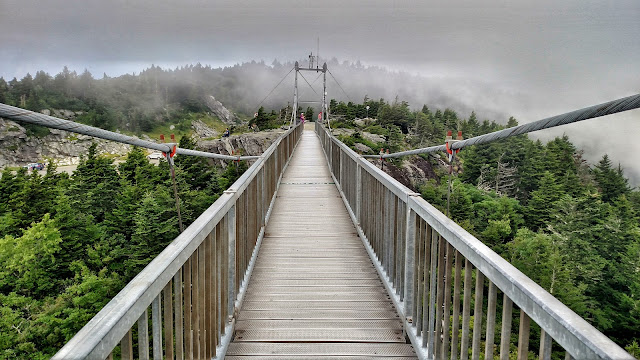 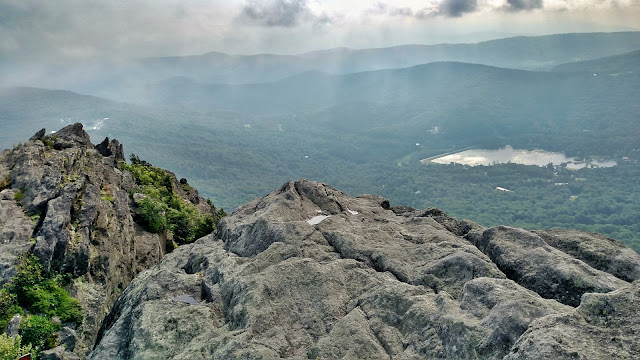