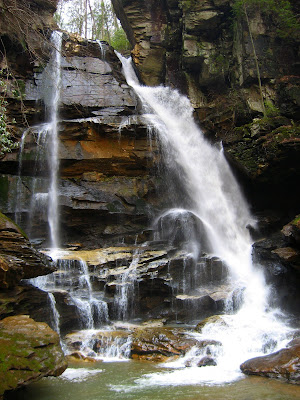 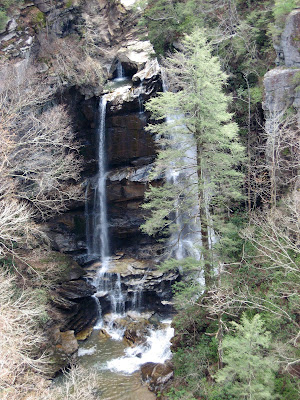 Big Bradley Falls is located in a small gorge near Saluda, NC.  Take exit 59 off of I-26 coming from Asheville and turn left on  Holbert Cove Rd.  Drive 3.2 miles and there should be a wide shoulder to pull off just before the road crosses the creek.  The trail begins beyond the big gate.

I set out to hike Bradley Falls with my two brothers.  I had seen pictures of it from the overlook and the base and read about the difficulty of reaching the base.  So going into it I had already accepted the fact that I was more of an overlook guy.  But with the three of us together I should have known better.  We were going to find a way down.

The trail to the overlook is a breeze and provides a great view of the falls.  A view good enough for most, but we had to see the base.  Since steep cliffs surround the falls, we knew to get down we had to swing in far away from the falls down the mountain.  Not knowing what we were doing we walked around looking for ways down.  We went up and down many paths that looked like trails but later fizzled out.  So finally we got the bright idea to pick a spot and bushwack all the way down the mountain.

Each spot we picked got harder and harder so we would come back up and try again.  Finally I noticed what I thought was the trail down.  I am still not sure if it was or not, but we used it and got down.  We went down the entire mountain on our butts because standing up meant a painful fall to your death.  You had to slide your way down while planning ahead which tree or root you would grab to stop yourself from rolling down the mountain.  Basically the whole way down was slide 5 feet, grab a branch to prevent sliding to your death and repeat.

Well, after sliding what seemed like forever we did reach the bottom.  Then we were met with a wade and lots of rock climbing and hopping.  It wasn't too bad going down but I kept looking back behind me at the slope and thinking no way we can climb this back up.  Especially since the ground was covered in wet slick leaves.

We eventually made it to the base and it was a really cool sight.  It almost looked like a totally different waterfall than from the overlook.  We hung out and climbed around the gorge and I took pictures.  It was a really neat area minus all the litter people had left.  After enjoying the view it came time to wonder how we would get back up.  The only people we saw at the base were people that had repelled down the mountain.  So they probably couldn't help us.

Finally when things looked and felt hopeless we noticed a couple walking around in flip-flops.  I immediately knew there was no way they came down the way we had.  We asked them how they got down and they pointed to a rope.  Apparently, we missed the trail with the attached rope hanging down the steep side.  It was easy getting back up and while it took hours to reach the bottom we were back up and on the main trail in maybe 15 minutes.

Climbing the rope straight up the mountain wasn't a long climb but I haven't been that scared in a long time.  I wasn't too pumped about having to do it as my brother offered up encouragement in the form of don't fall or you will probably die.  He was right though; if you fell climbing up you would have probably rolled off the mountain and fell a very long way.  I got half way up and couldn't find a foot hold and started freaking out (my knees and legs started shaking uncontrollably).  After hanging there a few minutes I calmed myself down and made the final half of the climb.  Then my brother of course grabs the rope and strolls right up the wall.  It probably wasn't that bad of a climb.  It was more me remembering how uncoordinated I can be at times.  Anyways it saved a lot of time and made the hike a lot easier, but I haven't made any plans on going back yet.

Big Bradley Falls was very much worth seeing from both angles.  Even if you skip the base the overlook is really cool and the waterfall is very tall (somewhere around 75 to 100 feet).  And the hike is easy including the base as long as you don't mind climbing the rope.