﻿
Heading west on I-40 get of onto Highway 70 West towards Sparta.  Turn left on Eastland Rd near Wonder Lake and follow the road 5.8 miles to Scott's Gulf Rd.  Turn right on Scott's Gulf and in 2.1 miles look for the parking area and trail head on the right.  The roads were still a little confusing here so a GPS really helps.  The hike is 8-9 miles round trip.

For a couple of years I have really wanted to go to Tennessee and check out some of the waterfalls.  There are some wonderful waterfalls in middle Tennessee but it such a long haul from Raleigh. Well, recently after many days and nights of looking at numerous waterfall pictures my excitement got the better of me.  I picked a weekend, convinced my wife, and booked a hotel in Crossville, TN.  Then Thursday afternoon we packed up and hit the road.  Eight long hours later we pulled into the hotel just before midnight.

I had planned a full schedule for the weekend and up first was Virgin Falls.  So early Friday morning we headed out and arrived at the trailhead at 8am.  The forecast called for thunderstorms all day and night for the entire weekend so I hoped this would thin out the crowds.  I knew this was a popular spot for weekend campers but we only saw two leaving as we started our hike and three coming as we left.  The rest of the six hours we had the woods to ourselves.

The first mile of the hike is an easy stroll through the woods.  We crossed the creek many times and came across some pretty cool rock formations along the way.  The first waterfall you encounter is Big Branch Falls.  Nothing is big about it though and it isn't very impressive, but the best is yet to come.


After Big Branch the trail turned a little more strenuous as it started downhill.  The trail was muddy and full of slick rocks due to all the recent rain.  Much of the trail followed along side the creek so there were many cool looking small cascades along the way.  We hiked for a good ways and the sound of rushing water became louder and louder.  At this point we had made our way to the top of Big Laurel Falls.

Getting down to the base for a view of the falls required a climb down the rocks.  I wasn't sure where the trail went down so I just picked a spot and made my way down.  After getting down the area opens up and you are standing in front of a magnificent waterfall. 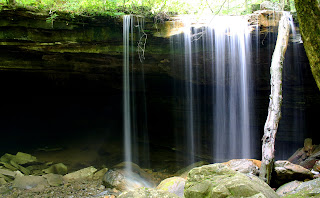 I could have stayed here for hours just taking pictures and exploring.  You really cant get an idea of how big the waterfall is from looking at pictures unless you shoot someone standing under the falls.  And standing under the falls was one of the many highlights of the hike.  The area behind the falls is a huge open cave that even had a campsite in it.  It was a beautiful area and something I had not experienced before.  I only wish  people wouldn't have left all their trash back behind the falls.

As hard as I tried to capture the beauty of this waterfall my pictures did not cooperate.  I stopped by on the way back out to try again.  But each time either the sun was shining all over the falls or it was raining and the wind was blowing the trees all over the place.  Anyways you can at least get an idea of the area behind the falls from the pic above on the left.  And here is a picture of my wife under the falls so you can see how high Big Laurel Falls really is.  Not sure why she decided to pose like that for the pic.

Here is also a short video of Big Laurel Falls:

About a quarter mile later the forest suddenly turned black.  If I didn't know the time I would have sworn I was walking through the woods at night.  Then the thunder and lightning came and finally the pouring rain.  We broke out the ponchos and continued our trek.

The thunder was extremely loud and the lightning was so close it was a little scary.  The storm was on top of us and after awhile it even got to the point where I was asking myself do I really enjoy hiking this much. And for me to be at that point I can only imagine how my wife was really feeling about this vacation I planned out and made her come on.  Being over 3 miles in the woods though the only choice was to press on and hope the storm passed.

When we arrived at Virgin Falls the storm finally let up some but it continued to rain. We were starving so we decided to eat lunch first.  So I got out my sandwich and stood and ate in the rain as I watched the waterfall.

This waterfall is the biggest reward of the hike.  It is a wonderful sight.  The water above flows out of a cave, drops over a cliff, falls to the ground, and then sinks back underground.  There is a trail that leads up to the cave and also a steep trail to the base.  I didn't try to make it down because the rocks were wet and slick and if you fell from up here you were not coming back.  In low water flow you can walk in the caves behind the falls and in the sink hole at the base.  I did get a few good pictures but it wasn't easy with the rain and wind.  The best picture I got is at the very top of the page but here is another view of the falls and a short video I shot. 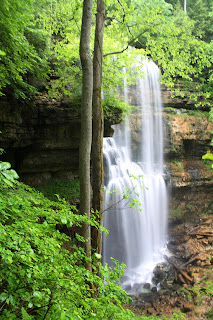 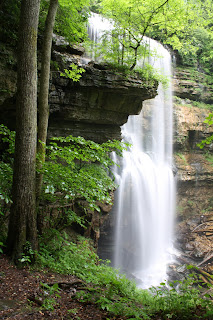 We hung out here for a good while and then headed back swinging by Sheep Falls.  We got a little confused and backtracked some trying to find the falls.  It wasn't too bad though as eventually we found one of the signs along the hike telling us where to go.

Sheep Cave was really neat and if I had a flashlight I probably would have gone further in.  Water flows out of this cave to form Sheep Falls which was tough to get a good view of.  I tried to get a picture but really there are too many trees in the way so the pictures aren't even worth showing.  Here is one of me in the entrance to the cave. 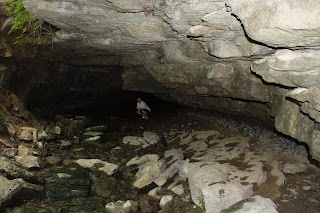 There is a trail to the lower part of Sheep Falls but somehow I missed it.  I had a map of the hike that I printed online but it wasn't very detailed and there wasn't a sign posted for the falls.  It is a nice waterfall that I really wanted to see, but we had been hiking all day and I know my wife probably didn't want to hang out any longer searching for it.  So we started hiking back to the car.

Hiking out is the really strenuous part as most of the hike is uphill.  And having bad knees didn't help as they were killing me when we finally made it out.  Six hours later from when we started we arrived at the car, had some water, changed clothes, and sat down and rested.  We then headed back to the hotel with a quick stop at Wal-Mart on the way.  I only mention that because if you have ever seen the website People of  Wal-Mart I truly believe it had to begin at the one in Crossville, TN.

This hike was great and I really liked how we had every waterfall to ourselves.  Definitely worth the 9 miles of hiking with two spectacular waterfalls and a couple of caves to check out.  It was a tiring day and we slept great that night.  The next day it was off to Fall Creek Falls State Park and then Burgess Falls.

﻿﻿﻿A couple of pics of rock formations I took on the trail.  Didnt get that many pics with the weather and having to pack and unpack my camera for any shot I wanted along the hike: