Hanging Rock State Park is located near Danbury, NC just north of Winston Salem.  From Winston Salem take Highway 8 north to Danbury.  Follow the highway through town and turn left onto Hanging Rock State Park Rd. across from the Stokes-Reynolds Hospital.  Follow the signs a couple miles to the large parking area at the visitor center.  You can pick up a park map here which list all the hikes and distances.

The original plan was to leave Saturday morning and swing by Hanging Rock on our way to Blacksburg, Va.  Then we would see a few waterfalls in Virginia and head home Sunday afternoon.  The weather, however, did not agree with our plans.  It rained and stormed all day long and numerous tornadoes ripped through the state of North Carolina .  Instead I spent my Saturday watching continuous storm coverage up until bedtime.  Bummed that the weather ruined our plans we decided to get up early Sunday and hit the road for a day trip to Hanging Rock.

We arrived around 9am and hit the first trail.  All the waterfall trails are fairly short with 0.6 miles one way being the longest.  The hikes are fairly easy but there is a good amount of steps to climb in a few trails.  Nothing to really bother you though.

Up first was Hidden Falls.  It is small and not very impressive, but on the way to Window Falls.  So it is worth the quick detour to take a look.

Next came Window Falls.  It may only be around 30 feet tall but it makes up for it with its surroundings.  The top section of the falls drop over a huge rock while the bottom cascades down another rock;  a very picturesque sight.  You can even stand directly behind the falls.  Walk to the top of Window Falls to see a small waterfall behind the huge rock with the window.  You will see the window in the rock when you first arrive at the falls, and I am guessing that is where the name Window Falls came from. 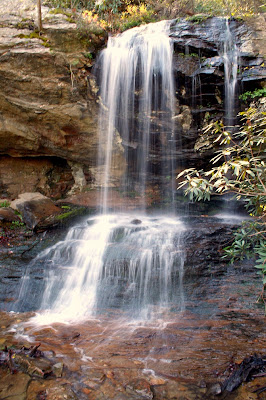 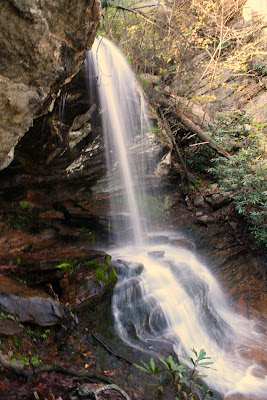 
﻿﻿﻿
﻿Next up was the hike to Upper Cascades.  At this point it was getting around lunch time.  The sun was shining brightly, ready to ruin my upcoming pictures and the weather had warmed up. The park was beginning to fill up.  I had just seen a very cool waterfall and was on my way to the next.  So I was in a pretty good mood even with my 14 month daughter throwing a nonstop fit because she didn't want to be carried or hold our hand when walking on the trails.  It wasn't until after the quick hike to the falls that I really started getting annoyed. 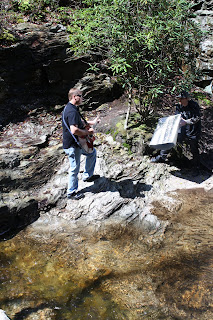 This guy (pictured) was standing in front of the falls shooting a music video. There were probably 10 of them working on it and there already isn't much room around the base.  I tried to wait it out but it was clear they would be there all day.  Even when I got down there the best place to shoot the falls was the exact spot where their video camera was set up.  So eventually I left without getting the shot I wanted and kind of pissed off.  I still cant help but laugh though, remembering this guy jamming out in front of the waterfall and thinking about how lame this music video must be.


﻿
To get to the last two falls we had to drive a few miles outside the park.  First was Lower Cascades.  It is probably the nicest waterfall in the park.  The gigantic rock wall beside the falls makes a gorgeous setting and the area is very open with room to explore.  By the time we arrived though the sun was really a problem.  It was beaming down right on the waterfall and I was not really happy with any shots I got.  I kept taking pictures but eventually it got too crowded with everyone hanging out in front of the falls.  So at that point I packed up and left.

Lastly we drove a little further down the road to Tory's Falls.  For not sharing the same enthusiasm over waterfalls as me, my wife is usually a good sport.  I could definitely tell by now though that she had it for the day.  The baby, who missed her nap, also let me know she was done for the day.  But being so close I had to see the last falls.  So I quickly jogged down the trail.

Tory's Falls is the highest waterfall in the park (pictured at the top).  It is probably around 100 feet tall but you can only see the top part.  I am not sure if you can make it all the way to the base and the way down looked pretty dangerous.  All the rain from Saturday made the falls look a lot nicer than any pictures I had seen.


I tried to get my pictures quickly and hurry back to the car.  The viewing area was small and of course the place I picked out to get my shot was taken.  A couple sat there petting and making out with each other as I stood there waiting and waiting.  Finally I got tired of waiting and decided to stand on top of them and take my pictures.  This quickly got them to leave and I finished up and headed back.  On the way back I shot by Tory's Den.  It is a quick trip down a separate trail and worth checking out.


There were many more sights to see, including Hanging Rock, but we needed to head home.  It had been a long day when we arrived home Sunday evening but overall a great trip and a beautiful park.  I only wished it hadn't been such a sunny day as it made taking pictures a tough task.
Posted by Ryan Carroll