From Westminster, SC drive west 16.2 miles on US 76.  Turn right on Chattooga Ridge Road.  Drive 2 miles and turn left onto Fall Creek Road (FS 722).  When the road forks go left.  Go 0.7 miles where the road crosses over the creek.  There is a small pullout on the left.  Park and hike up the road about 150 feet to a faint trail down the the steep bank on the left.  There was flagging tape marking the trail.

Normally, there are very few places I would rather be than hiking along to a magnificent waterfall.  However,  this was really an unexpected trip.  I still had my heart set on the beach house in Saint George Island, FL (the original plan).  Especially since it included a private pool and indulging in fresh, juicy oysters from a place that calls itself the oyster capital of America.  Which just happens to be my absolute favorite food..

Unfortunately, it was not meant to be.  Tropical Storm Debbie visited the island instead and she took her sweet time.  The storm crept slowly through the island closing down the bridge, knocking out all the power, and rerouting our annual family vacation to my brother's house in Clemson, SC.  So after two nights in a hotel (Jacksonville and Tallahassee)  I loaded the car up for the third time and headed to South Carolina.


Three straight days of driving, many tanks of gas, and countless wonderful hours of riding with a toddler and a baby later, we pulled into my brother's driveway.  My only silver lining was finally getting my hands on some Cigar City beer from Florida.  And while they do make excellent beer it wasn't nearly enough to make up for the trouble it took.

The rest of the week in South Carolina was pretty much spent catering to the 6 kids.  However, the morning before heading back to North Carolina my brothers and I decided to squeeze in a quick trip to Fall Creek Falls.

We arrived at the trail just after 8am and made a short scramble down to the upper falls.  The trip down was very short and easy and led to this scenic 35 foot waterfall:


From the base you can pick up the trail heading downstream.  At first the trail is marked with flagging tape and pretty easy to follow.  I just couldn't figure out why some parts had pink and some parts had blue tape since I only saw the one trail.  A ways down the trail the flagging tape disappears as the path winds to and away from the creek.  It got a little tricky at times but you could always just make your way back to the creek and head downstream if you lost the trail.  Just before reaching the second falls the flagging tape appeared again and marked the trail all the way to the third waterfall.

The trail is mostly flat and moderate, but almost completely overgrown.  This was the worse part because about every 5 minutes you had to stop and do a tick check on your legs.  I had at least 12 just on me, plus the two we found in the car, and the one attached to my back when we got back to my brother's house.
Adding in the 100 degree heat on the hike out, the annoying horsefly hiking with me the entire time, and endless spider webs, I was quite happy to get back to the car.

You can look at the picture of the second waterfall (top of page) and see how awesome it is.  That sight alone made the entire hike worth it.  It is probably around 30 feet tall.  The last waterfall was not even a 1/4 a mile further down the creek.  It is small but nice.  The coolest thing about the third waterfall is its location.  This is where the creek meets the Chattooga River.  The trail ends through the trees as the area completely opens up to a beautiful view of the river.


View of the Chattooga River from the end of the trail: 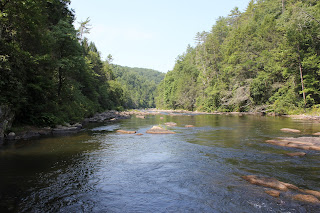 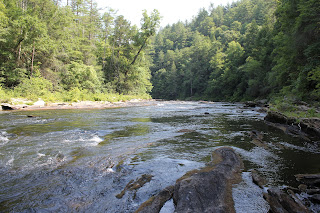 The waterfalls were all very enjoyable.  Especially the second falls which could rival the beauty of almost any waterfall in South Carolina.  It just was not one of my favorite hikes.  Mostly because of my hate for ticks and the massive heat wave on the east coast that weekend; plus an annoying ass horsefly.  Then lastly there was the incident where I took a step on the edge of the narrow trail and the ground gave way.  Leaving me in a hole up to my waste standing on top of the many tree roots underneath.  Both of my legs were black.  However, at the end of the day I was still very glad I got to see Fall Creek Falls.