Blackwater Falls State Park is located in the northeaster part of the state near Davis, WV.  The address is 1584 Blackwater Lodge Rd, Davis, WV 26260.  A short hike takes you down near the base.  The falls is around 60 feet tall.

Blackwater Falls State Park is the home of West Virginia's most famous waterfall, which is of course Blackwater Falls.  Growing up in North Carolina while having lots of family in Ohio, I took many rides through West Virginia. This waterfall has always been etched in my mind.  I still remember all the Blackwater Falls postcards and pictures in the little gift shop areas at every rest stop.  So after many years of bathroom breaks these pictures had built up a wonderful image inside my head.  I was beyond excited to finally see it in person.

First off the drive there took forever.  We went through dirt roads and gravel roads and up and down mountains. Came to dead ends and roads that somehow didn't even exist.  It shouldn't have been this difficult as I was following my parents.  But for some reason every time my GPS said go right, they went left. Whenever it said turn left, they went right.  It became comical as they were also following their own GPS.  Eventually though it did lead us to the park, just much later and darker than expected.  While Blackwater Falls would have to wait till tomorrow at this point I was just happy to finally be there.

The next day we drove over to the falls and parked at the west side trail next to the trading post.  There is also another trail, The Gentle Trail, that comes in from the east side..  The western side is the way to go, as a fairly short trail and some steps take you down to the two viewing platforms close the falls. The Gentle Trail offers a view high above that was less impressive and probably could be skipped.  That day I couldn't actually get as close as intended since the lowest viewing platform was closed due to ice. Nevertheless, I still had the great view in the picture above.

Later that day we took the kids on a short hike to Lindy Point.  It was just under a mile round trip and pretty level, so I figured the kids wouldn't whine too much.  The trail was easy but very muddy from recent snow that had melted. Once reaching the end of the trail we arrived at a viewing platform that offered a spectacular look into Blackwater Canyon.  A spectacular and very windy view.  It was crazy how windy it was.  It felt like it was going to knock you over.  So while the kids were still too young to appreciate the great view, they did love the wind.  I hated the wind, but the loved the gorgeous view.

Early the next morning my parents agreed to watch the kids so my wife and I could try to do a quick hike to Elakala Falls.  Elakala Falls is the first of a series of four waterfalls on Shays Run that empties into the Blackwater River. The trail is just to the left of the lodge and takes you to a small footbridge over the first waterfall. After that the trail winds away from the creek with no official way down to the next three falls.  It is pretty much a very steep bushwack downstream with each section of falls around 0.1 miles from the previous.

Well my hike already began on a bad note.  After a quick drive to the lodge and a nice stroll to the first waterfall, I set up my tripod and waited for the clouds to cover the sun that was staring me in the face.  Then as soon as I went to snap my first pic up popped a message on the camera: no memory.  I foolishly had taken out the memory card last night and left it in my laptop.  I had already started the hike much later than I had planned and now I had to go back to the cabin.  So I packed up, drove back to the cabin, grabbed the memory card and headed back to the trail.

After a quick walk to the first falls again and a few photos that turned out very badly , I began the climb down to the second falls.  Each section got harder and steeper.  The biggest problem was finding a way down.  Everywhere I looked there was a fallen tree, and if there wasn't a tree there was a sheet of ice.  The entire hike was spent climbing through trees and carefully shuffling over icy, slick rocks. Everything I read had warned me that this hike was difficult as you bushwhacked down the steep creek.  But I think without the ice it would have been pretty manageable.

Arriving at the second falls it was the least impressive of the four.  It was impossible to find a good and safe angle to shoot from so I took a few pictures and began trying to plan a path down to the third falls.  At this point the hike was becoming much steeper and more difficult to find a way down.  You pretty much had to pick any spot you saw without ice and try to head that way.

When I reached the third waterfall I was right on top of it.  Way too close to get any kind of decent pictures and with the fallen trees and ice everywhere, very limited on my options.  I snapped a few pictures and continued my climb down.  Hopefully, I would have better luck with the fourth falls. It looked to be the most impressive and the one I was most excited to see.

So I climbed and scrambled my way down the least covered path I could see.  Looking for any available ground, maneuvering through the trees and over the ice.  As I approached an edge, I peered over.  There it was.  The jump. The jump that would change my entire life.  The jump that would change the world.  The jump that never was. Actually it was probably just a three foot jump that you wouldn't even think twice about making.  But today you would.  The small area of rock was completely covered in ice and surrounded by ledges on three sides.  A steep ledge that dropped down very far and a fall certainly meant death.

Jumping down to that rock any other day, no problem.  It looked liked such an easy and quick jump down.  But, I just wasn't sure what would happen when I landed on that ice.  However, I did know what would happen if I landed and slid over the edge.  So I debated it, and tried to convince myself because I really wanted to see that last waterfall. Maybe if I was alone, but my wife wasn't going to let me try it anyways.

Back at the car and now lunch time, today had not started off very well.  I was really looking forward to this hike but it felt very unsuccessful and unsatisfying. And from a picture stand point, the same.  I couldn't get one shot I actually liked at the first falls and on the second and third I had trouble getting any good angles.  Plus all the ice had knocked down so many trees that they littered the bases of the falls. After seeing so many beautiful pictures of Elakala Falls, it was disappointing thinking of what would become of mine.  The whole morning sucked; forgetting my memory card, ice and fallen trees everywhere, bad pictures, and not even making it to the last waterfall.  Another day it may have been an awesome time and great experience.  If I ever get back I will have to try again.

Some pics to show just how enjoyable the hike down really was: 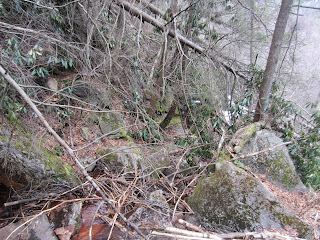 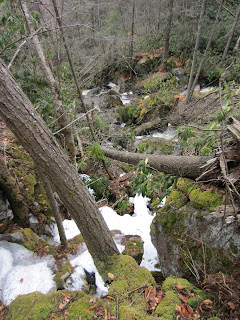 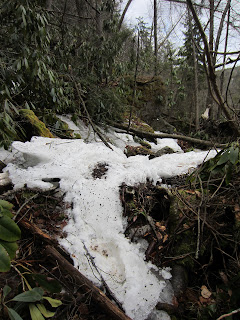 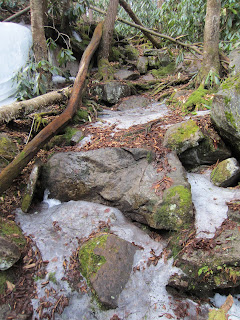 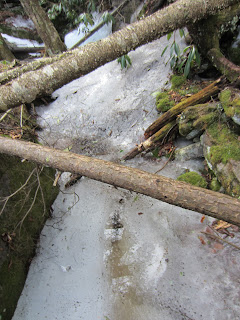 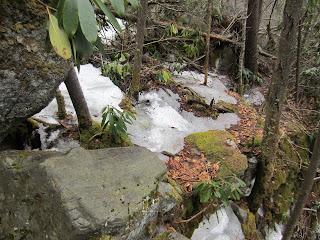 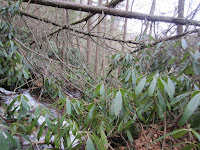 Although Elakala Falls didn't turn out as I hoped or expected, I had a great first visit to Blackwater Falls State Park. Two days of 60 degree weather (though it was snowing the morning we left) spent venturing around this beautiful, uncrowded park.  See the 54 room lodge and restaurant were closed for renovations leaving only the cabins and campgrounds open.  The place was a ghost town and it was great.  We even had the indoor pool to ourselves every night.  This all made me feel very lucky because you could tell this place can and will be jammed packed with people very soon as they seemed to offer countless outdoor activities.

Our visit was unfortunately brief, but very beautiful.  Lindy Point offered an amazing view of the canyon and Blackwater Falls was magnificent and powerful.  It even lived up to all the hype the many beautiful photos helped create in my mind.  I have really enjoyed the state parks and beautiful scenery all around West Virginia.  In fact, on the drive home we passed a really neat looking place I hope to one day visit called Seneca Rocks.