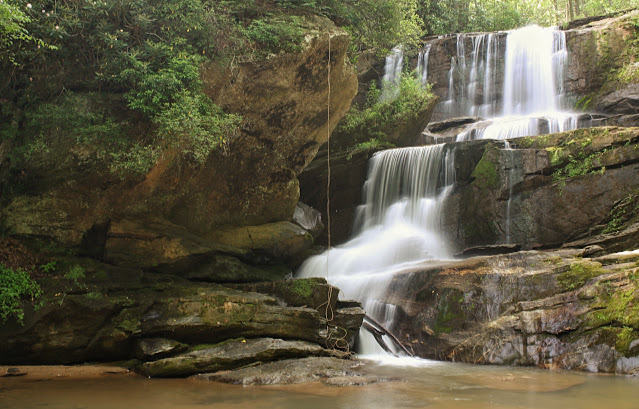 Parking is near 5436 Holbert Cove Rd., Saluda, NC 28773.  It is just by the bridge that crosses Cove Creek.  The big parking area is for the Bradley Falls trails and the smaller parking area just across the street is the Little Bradley trail. The trail is around 2 miles round trip to the almost 50 foot tall falls.

Starting out on the hike you immediately come to the first fork.  Take the left trail away from the creek and in about 3 minutes you will come to the second and last fork.  This time take the trail heading down to the right.  The trees were marked with red blazes and simple to follow.

The hike was very easy but on a not so well maintained trail.  I do remember scrambling over some rocks in a few spots and some nice scenery on Bradley Creek but overall the trail seemed mostly uneventful.  However, it is quick and leads to a beautiful (and very popular) waterfall.

Now getting to the picture above.  The first thing you probably noticed in the picture is the wonderful rope dangling beside the falls.  I can usually find something to complain about in anything I do, and this rope soon became my main frustration of the day.

Racing thru the woods I was determined to get to the falls before the sun.  As soon the sun would be high above in the cloudless sky, beaming down on to the waterfall below, ruining my mood and my pictures.  So I quickly made my way to the base of the falls and to my relief the sun was still tucked behind the trees high above.  Plus as a bonus we were the only ones around.

I quickly set up my camera and tripod.  Messed with the settings.  Went to snap the first pick and that is when it happened.  A rope flung down from high above, hanging there front and center, taunting my every move and every picture.  Next the climbing expedition began.  One after another people kept coming and coming as they rappelled down the rope.

First came one of the instructors  flipping, turning, sliding and posing his way down the rope like an exotic dancer working the pole.  It kind of felt like he was showing off, either way it was a enough for me to decide I hated the guy. Next came the girls, One by one they laughed and screamed as they awkwardly slid down the rope.  I figured it would end soon, but the women just kept coming and coming down the rope.  One after another they kept magically appearing from the trees above as they made there way down to the rope  Finally it did end as the other instructor made his way down for the grand finale.  Unfortunately, by now the very sun I had quickly raced to the falls, beamed down all over the falls casting shadows everywhere.  Then to top it off many more people had arrived and begun to climb up, over, and all around the falls.

As I waited a woman approached.  "That's my husband," she proclaimed as she pointed to the man frolicking in the falls.  I glanced at him and half nodded.  "Did you get any good pictures of him?" she asked.  Ah, good pictures of him, I thought.  Good pictures of him, the man I have been yelling at and cursing at in my head for thirty minutes. Pleading and begging him to move out of my way, asking him to leave, yelling at him to go away.  Asking him for one picture without his large, wearing a way too small water-shirt, belly splashing around in the background. Negotiating with him in my head.  Just move for 2 minutes.  No, 1 minute.  No, just one picture.  Just give me one measly picture. That's all I am asking.   Move, please just move.  Move!  That guy?  "Maybe," I said.  "He's so silly," she remarked as she turned and headed away.

At this point it was pretty much a wrap anyways.  The sun was too much of a battle and the place was packed with people now.  So when I did start taking pictures they were pretty bad.  Which is why, unfortunately, I have a picture at the top of the page with a rope hanging down the middle of it.

After we got back to the car, we decided to hike to the Bradley Falls overlook and then call it a day. The last time I was here I hiked to the bottom of Bradley Falls with my brothers but didn't have time to do Little Bradley. So I was happy to get back and see Little Bradley Falls.  Pictures aside, it did not disappoint.  The trail was short and easy but enjoyable (minus the people).  The three tiered waterfall waiting at the end was beautiful and well worth the trip. Plus the fact that another great waterfall trail is just across the street makes it even better.

Visiting Asheville for a few days and not wanting to spend a lot of time driving around is why I settled on Little Bradley Falls.  It was about 40 minutes from our hotel, and despite a few of my frustrations brought on by others it was a great choice.  During our remaining time in Asheville, searching for another close hike to squeeze in, I came across Lookout Mountain in Montreat, NC.  So the next morning we had breakfast then headed over to Montreat. 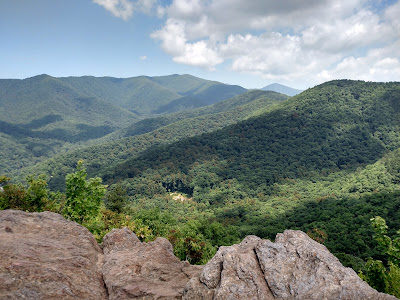 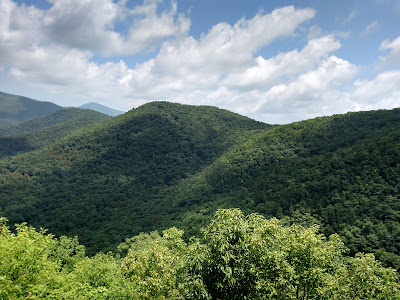 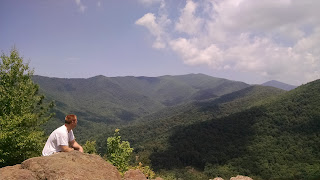 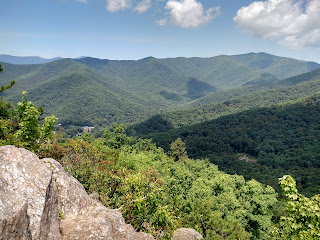 The climb up felt long and treacherous.  It was a little over a half mile to the top with a very significant incline that wore me out. I kept telling myself I was just tired from hiking 6 hours yesterday and swimming that night. Finally, after huffing and puffing my way up and up I could see the top. The next thing I could see was a 3 year old running around and laughing followed by a pregnant woman strolling down the mountain.  My excuses were now no longer reassuring. That was the worst sight to see as I leaned over, struggling to catch my breath, hoping not to keel over. Now it was officially confirmed, I was out of shape.

The views from the top were pretty good.  Any view from the top of a mountain will be wonderful but I cant remember anything special or memorable.  All I can really remember is just how exhausted I was.  But in shape or not I don't think I would hike this trail again.

Lastly, while in Asheville we had time to stop by and check out Sierra Nevada.  I hadn't been back since it opened so I was excited to see it.  We did the tour, walked around a little after, then sat outside and sipped on a Barrel-Aged Bigfoot. A really big and neat place and as always a fun trip to Asheville.