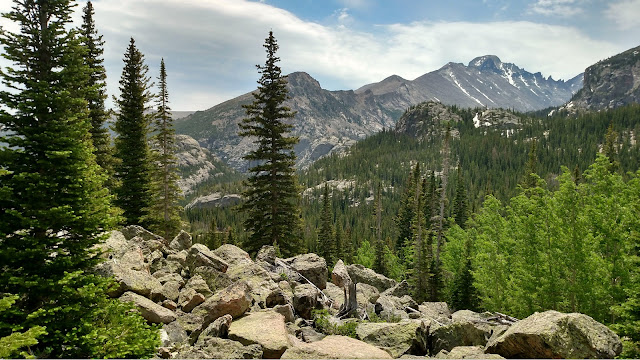 It's a place where whenever you look up you stop and stare in disbelief.  Everything you see is amazing and unbelievable. Beautiful, huge mountains up above and all around.  The most incredible and pristine lakes you can imagine.  The greenest, tallest, most perfectly straight trees that grow to the sky.  Beauty all the way up to the truly unique alpine tundra where plant life just disappears.  Astonishing sights you never want to take your eyes off.

By now you probably get the point, the place is gorgeous.  So I will stop telling you how aesthetically pleasing it is and just post a little bit about how I spent my way too short two days there plus a bunch of pictures. Mostly just pictures.

And just know that now whenever i hear the word breathtaking, I will think back to Rocky Mountain National Park. Fondly reminiscing those wonderful views as I strolled through the park.  Or I may think about the Seinfeld episode where Elaine is smitten after the doctor calls her breathtaking, then troubled when he later calls the ugly baby breathtaking too.  Either way I will never forget those beautiful views.

We arrived at the Bear Lake trailhead just before 7 am.  I had spent a ton of time reading and pondering my options. And since we only had two days in the park, I really wanted to get the most bang for my buck.  I eventually settled on a hike referred to as The Four Lakes Loop.  It started at Bear Lake, went to Nymph and Dream Lake, next to Hiayha Lake and then on to Alberta Falls.  Lastly, from the falls the path connected back up to Bear Lake. And as a bonus stop, Emerald Lake could be seen with an extra 1.3 mile hike, bringing the total hike to a little over 7 miles.

Heading up the trail I was a little nervous.  My friend had warned me about altitude sickness, so naturally I spent a good chunk of time checking out the numerous horror stories on the internet. While also reading many stories from people that never even noticed it.  Having no idea where I would fall on the spectrum, I naturally assumed the worse. I had already played out numerous worst case scenarios in my head.  Ones that led me to the hospital, which then led to the discovery of deadly diseases, then ultimately my demise.

Shortly into the hike I did feel a slight shortness of breath come over me.  But soon after slowing my pace down it disappeared and I felt great.  So great that I was zipping up and down the trails, hopping up and down the rocks, trekking all around, and even exploring some inviting areas off the trail.  I was no longer worried about altitude sickness, feeling fine, as I joyfully skipped down the beautiful trails.

On and On we hiked.  Walking from lake to lake in complete awe of the surroundings. Gorgeous lakes with perfect picturesque mountain backdrops, numerous small waterfalls and cascades, deer and elk that were plentiful, and awesome views in every direction.  Everything was so beautiful and every step so exciting.

Going into hour 6 of our 8 hour hike is when the altitude finally really hit me.  It started as a migraine and then it kept getting worse and worse.  By the time we got close to Alberta Falls I was completely miserable.  I couldn't remember my head ever hurting that bad as the pain became almost unbearable. I just wanted to be lying in bed with my eyes closed and my body absolutely still.  I wanted to be anywhere but walking on this trail.

The next wonderful thing to come were the people.  The people were everywhere as apparently being one of the shortest hikes in the park, it makes sense that Alberta Falls is also one of the most popular. Seven miles in and I was starting to believe dying may be a better option than finishing this hike. So you can imagine how joyous and inspirational it was to see all the smiling, laughing, non perspiring, flip flop wearing, only walked a half mile from my car people breezing by me.  Each one shunning me to the side as if I were holding up their precious lives.

Then things got even worse as next came the nausea and dizziness. I was done.  I could no longer enjoy this place, no longer appreciate the great beauty.  I just wanted to get off this trail now.  Though unfortunately, I still had 0.7 miles to the car.  An even better it was entirely uphill.  At this point I felt like death, complete misery. Then came the rain.

I'm still not sure how, but I did make it back to the car that day.  At that point I felt so bad everything was kind of a blur.  One thing I do remember and will never forget is my friend suggesting some protein would help me.  Luckily he had a nice bag of turkey jerky too.  I wont describe what happened when I took a huge mouthful (I'm getting sick just typing about it) but lets just say I haven't had turkey jerky since and I have no desire to ever eat it again.  And who knows it may have been really great turkey jerky but that feeling my body had when i began chewing it shall forever haunt me.

After getting back to the hotel and laying down a few hours I felt so much better.  Really tired, but back to normal and ready for tomorrow.  Though I was kind of bummed I missed Bear Lake which is probably the easiest hike in the park.  I had originally planned to see it on the way out, but with the way I felt at the time, I wanted no part of Bear Lake.  However, sickness aside, it was an awesome day with many great sights. 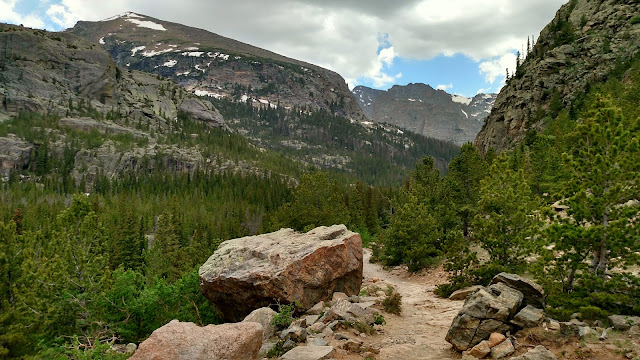 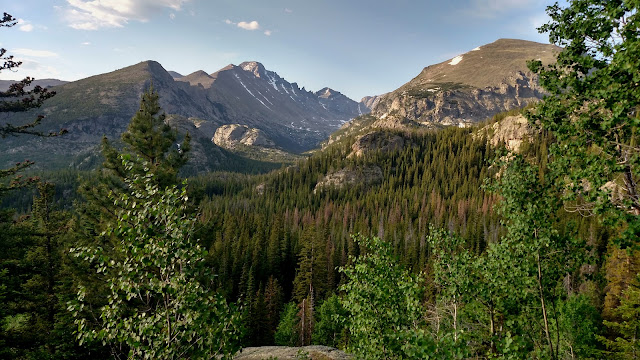 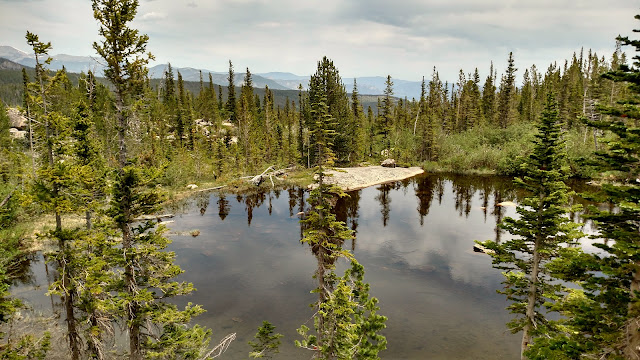 For my second day I had the grandest of plans.  Get up extra super early and head up Trail Ridge Road, hike a bunch of miles to a mountain's summit, back down, then finish driving Trail Ridge Road while stopping and seeing all the sights along the way.

It was a great plan indeed.  One I even spent many hours perfecting and rehearsing.  And yet it would never come to fruition.  But honestly, I knew the night before it had no chance.  Looking at my friend that evening, I don't even think I can describe how tired he looked.  I didn't  know it was possible for a face to look that exhausted.  So when he went to bed around 7 pm, I had my doubts about day 2.  In fact, that morning around 5 am when my alarm went off, I could see and hear that I had no shot at waking him up.  So I decided to let him sleep.  And when I almost couldn't take being in the hotel any longer, thankfully he decided 15 hours of sleep was enough.  So we finally headed out, grabbed something to eat, and made our way back to Rocky Mountain National Park.

Now at this point any summit hike was out of the question.  As you have to do them really early because you don't want to be caught on top of a mountain when the afternoon storms roll through and no shelter is to be found.  So we skipped the hike and went on to the other part of my plan, Trail Ridge Road.

Trail Ridge Road is the highest continuous paved road in the United States, almost 48 miles long, and world famous.  It reaches 12,000 feet at its highest point with 11 miles above the treeline.  So I assumed on one's first visit to Rocky Mountain National Park you must drive it.

Starting on the Estes Park side we drove Trail Ridge Road until it ends at Grand Lake.  Stopping at each and every pullout along the way I tried my best to capture the beautiful scenes.  But with the cloudy skies and changing weather I had a difficult time.  In fact, I wasn't very happy with any photos on day 2.  Nevertheless, here are some below.

Photos aside, it was still a pretty good second day.  And while I still feel Trail Ridge Road is a must do on your first visit,  I much prefer hiking to driving.  I enjoyed all the sights along the way but it was too much in and out of the car for me.  I would take hours of wandering through trails any day.  All together, a fun trip full of some of the most beautiful sights I've ever laid eyes on.  Just way, way too short. 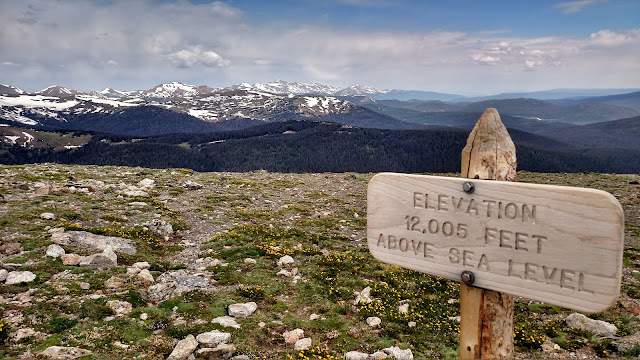 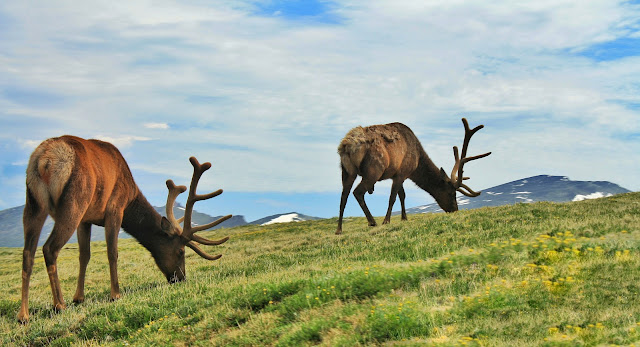 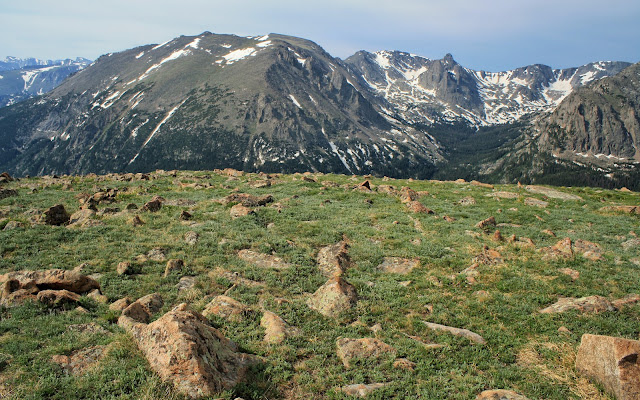 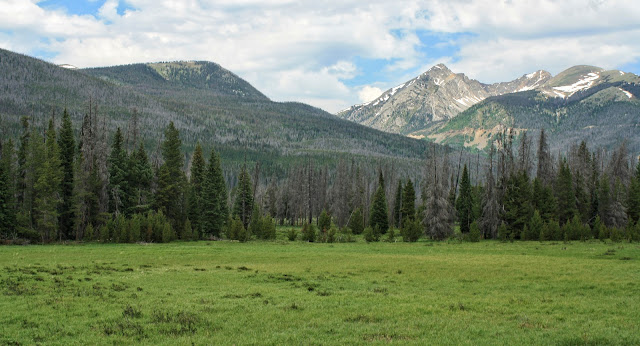