There seems to be a few ways to get to Brush Creek Falls but the waterfall is located just off I-77 on Brush Creek Falls Rd in Princeton.  We were headed north on I-77 and took exit 14 to Spanishburg-Athens Rd.  Made a right and then the first left onto Eads Mills Rd.  In 3.4 miles you will turn right on Brush Creek Falls Rd.  Then it is about 2.2 miles to the parking area.  From there it is just a short walk to the nearly 30 foot high falls.

It seems every time I go to West Virginia somehow, someway I end up lost on a mountain.  Driving down a single dirt lane road with no signs of life or hope.  Where even the GPS voice just gives up and tells me, "you are lost, we have no idea where you are" and of course my phone has no signal either.  Then whenever I do pass a house, they always own a pack of mountain dogs.  Dogs that patiently wait in the yard just for that moment when I drive by.  And before you can even blink, like being shot out of a cannon, they charge.  Chasing and harassing my car just to get their kicks.  And on the slight chance I would see any human life, they just stare at me with big eyes and hanging jaws like I'm the first sign of life they've seen in years.

Well, not this time. This time was much different.  This time we stuck to the interstates and highways and civilization. And this time, for the first time, I wouldn't get lost at all.  This time we would be living it up at a resort just off the main road.

A resort so fancy it even had a phone hanging beside the toilet.  You know you are living the life when you have a toilet phone; you know you've arrived.  In fact, it now baffles me that anyone could live without one.  And after living as one of the elite, although briefly, I'm not sure how I can be expected to return to my life of mere peasantry. Though by the end of the week, as wonderful as it was, I would loathe that phone.  Every single time the kids used the toilet they had to mess with that damn phone.  Banging it, dropping it, pressing buttons, and probably calling God only knows who.  As much as I fussed or yelled about it, I couldn’t blame them though.  It was right there, begging them to mess with, calling to their idle hands.

This time the trip would be mostly laid back and as much I hated doing it, I let my kids do the stuff they wanted to do.  I really didn't plan out anything, which came as a shock to my wife.  So with the kids leading the way it was lots of pool time and playgrounds and then more pool time.  But we did get in one hike to Brush Creek Falls which was pretty close by.  Then on our last day we drove over to Lost World Caverns since the kids had never been to any caverns.

Brush Creek Falls is a quick 1/4 mile hike down an old road.  The trail begins just to the right of the shelter and picnic tables.  The trail takes you right up to the edge at the top of the falls and then continues a short distance further to the base.

The creek is nice and wide at the base and I liked how open the area was.  The creek is littered with rocks near the base of the falls, which the kids enjoyed hopping around on.  You can make your way right up to the falls if you choose or even carefully walk around the ledge up top.  I did see some videos online of people jumping off the top, but that idea always scares me.

While not very high, Brush Creek Falls is pretty wide.  It is also a very scenic waterfall which unfortunately is kind of hard to tell looking at my pictures.  I had a brutal time battling the sun and spray.  I knew my pictures would be bad, and they were bad; every single one I took.  Still, a very beautiful waterfall with a trail so short the kids didn't even have time to complain. 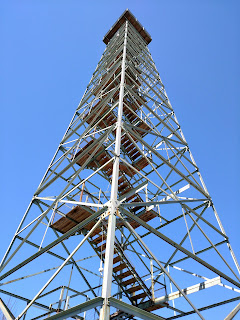 On the drive up to West Virginia I began searching google for any interesting stops along our route.  I quickly came across one in Wytheville, Va.  Big Walker Lookout, a 100 foot climbable tower that showcases views of the mountains in all directions. Plus there is a large country store, ice cream, and some sitting areas.  It sounded interesting enough so we pulled in, paid the not too much but still not worth the price of admission fee and began our climb to the top.

The looks from the top of the tower were nice and beautiful.  The hike up was windy and scary.  And although the views were definitely worth the hike up, I would never do it again.  The tower looked old and broken.  It really felt like it could tumble over at any minute.  Plus the increasing wind and swaying of the tower as you headed to the top only added to my uneasiness.  In fact, by the time my kids made it to the top they were so frightened they immediately headed down.

Luckily we had our own guide dog leading us up the tower and assuring us it was all fine.  He led us almost the entire way to the top.  But, unfortunately he wasn't as helpful on the climb down. On the way down he began nipping at my 4 year old’s ankles.  Doing this with every step she took and she was freaked out.  Hearing this take place, as I was still taking pictures at the top, I raced down to meet them.  I called the dog to follow me as I climbed down the stairs ahead of everyone.  And lucky me, every step I took, that dog bit my calves.  Even knowing this was the dog's play bite, it still stung so I could see why my kid was so upset.  Plus it was annoying as hell.  In fact, the entire time on the property it seemed like this dog was always in our way.  I love dogs, I have a dog, but I wouldn't come back with that dog around.  Well, honestly I wouldn't come back anyways.

Heading up the tower: 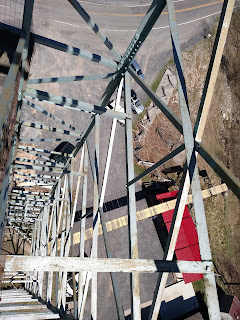 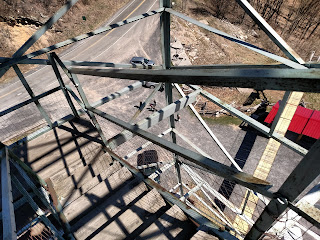 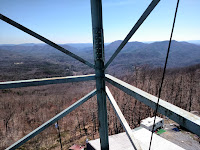 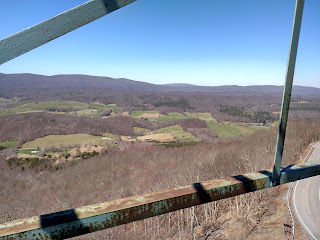 View from the top: 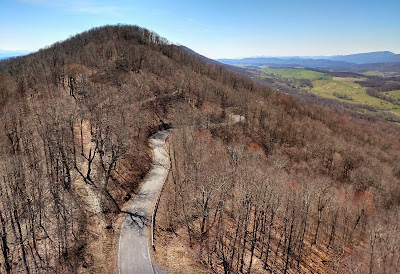 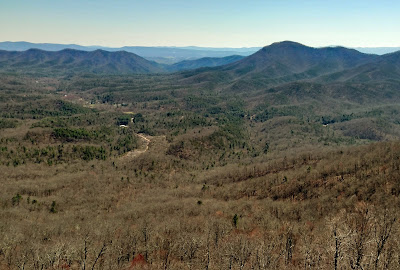 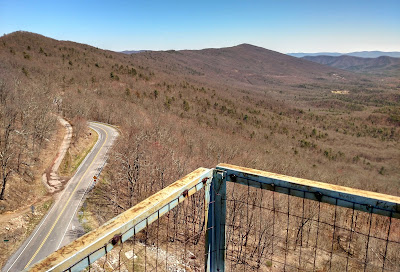 We managed to stop at the nearby Grandview National Park in Beaver, WV.  Here are a couple pics from the main overlook: 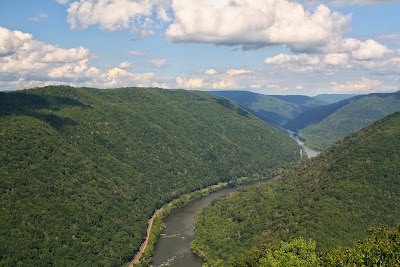 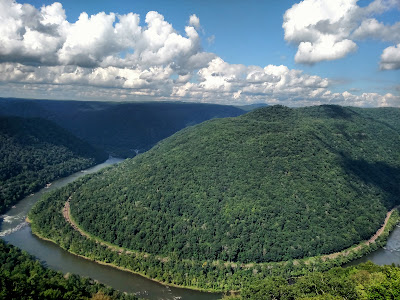