Heading west on US 64 from Brevard, NC turn left onto highway 281.  In 0.7 miles you will see the entrance for Gorges State Park on your left.  You cant miss it.  After entering the park follow the main road.  You will pass the park office and the trail head parking will be a little ways further down the road on your right.  Rainbow Falls is 150 feet tall and a 3.0 mile round trip hike.

The first time I tried to visit Rainbow Falls the Gorges State Park entrance was closed for construction.
Then after seeing the no parking signs along highway 281 I had no idea how to actually get to the falls.  Regretfully I drove on missing out on one of North Carolina's best waterfalls.

Three long years later I found myself in the area again and I was not going to miss my chance to finally see Rainbow Falls.  Luckily this time Gorges State Park was open along with a newly constructed connector trail from the parking lot to Rainbow Falls.

The hike is a moderate 3.0 mile round trip.  However, after being stung twice by a yellow jacket my hike felt much more strenuous.  Fifteen minutes into the trek I jerked as I felt a sharp pain in my arm.  About the same time I realized I had been stung I watched the yellow jacket come back to give me another.  That was enough for me to know it was time to get the hell out of there.  My brothers seeing what had happened quickly followed me as I sprinted down the trail.

A good ways up the trail we slowed back down and continued our hike.  I wasn't sure how much was real or just in my head but I started feeling worse and worse.  The rest of the walk to Rainbow Falls I felt kind of loopy and just out of it.  My arm was swelling up, I was scared I was allergic to the sting as my brother filled my head up with his scary allergic reaction story, and I was hot and tired of walking.  Honestly I really wanted to turn around and go home and my brothers kept suggesting it, but I didn't know when I would ever make it back here.  So I pressed on and told myself just see Rainbow and then we can go home.

About an hour later we arrived at Rainbow Falls.  As soon as I saw the waterfall I was immediately thankful that we did not turn around.  It is a magnificent sight and one of the most beautiful waterfalls in North Carolina.  There is a great view from the overlook but also a few different trails to follow down to the base of the falls.

The base is lined with huge rocks which allow you to walk up to the falls.  It is so impressive being able to stand right under such a huge, tall waterfall.  There is lots of room to walk around and explore down here and luckily we had the entire place to ourselves.

Unfortunately as great as this waterfall was my pictures were not.  We got there around 12 with a bright sun directly overhead.  This exposed the left side of the falls while the right side was completely shaded by the huge trees around it.  Of course when we left the clouds rolled in.  Then with my luck, on the second trip by the falls heading back towards the car the sun rolled back out again.

This waterfall definitely belongs near the top of any one's list of waterfalls to see in North Carolina.  It is an awesome feeling standing by the base of this massive and powerful waterfall.  It is an experience pictures can not do justice for.

Finally starting to feel better we continued down the trail to see Turtleback Falls and Drift Falls. 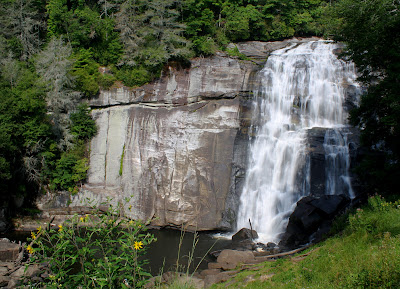 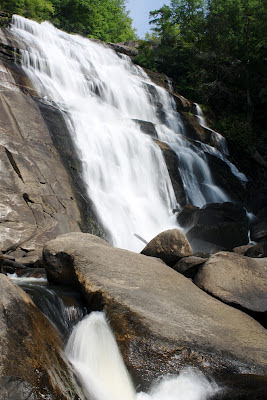 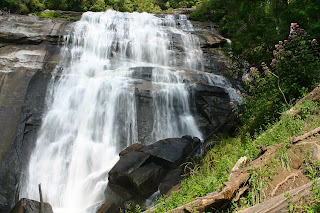 ﻿
Here is a video I shot near the base where the rainbow is  somewhat visible: